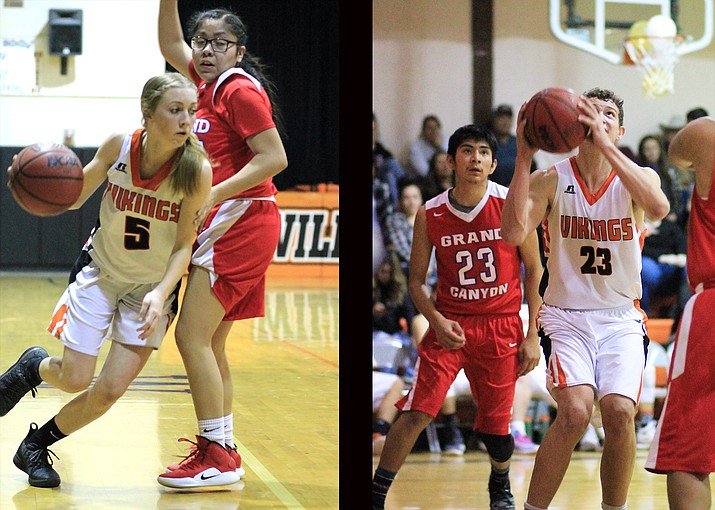 Vikings Sydnee Mortensen and Will McMenamin had a big night for the Vikings Jan. 25.

WILLIAMS, Ariz. — The No. 19 Lady Vikes had the fans on their feet in a nail-biter Saturday night, when they faced the No. 8 Grand Canyon Phantoms 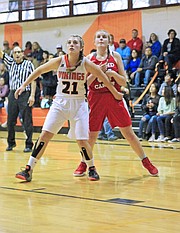 Amaryssa Orozco boxes out a Phantom player in the game Jan. 25.

at home. The Phantoms came into the game on a three-game winning streak and had previously beat the 19th ranked Vikings 61-37 Jan. 8.

The Vikings trailed the Phantoms for three quarters, but the shooting prowess of sophomore Sydnee Mortensen kept the Vikings in the game. The 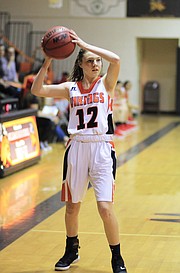 Maegan Ford looks for an open man under the basket.

Vikings tied it up in the fourth with just minutes to play before losing 66-63 after Grand Canyon sharp shooter Cayli Miles sunk a 3-pointer near the buzzer. 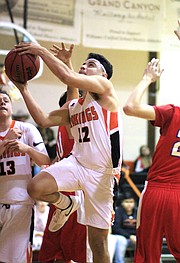 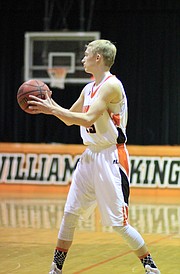 The Vikings trailed 19-4 in the first quarter, but outscored the Phantoms 23-17 in the second. They headed to the locker room trailing 36-27. The Phantoms led 16-12 in scoring in the third, but the Vikings rallied and brought in 24 to the Phantoms 14 in the fourth quarter.

Mortensen lit up the boards for the Vikings, bringing home a season high 32 points and leading all scorers for both teams. Mortensen went 9 for 18 in field goals tying the Phantoms Alana Keebahe with 50 percent shooting from the floor. Mortensen went 3 for 4 in 3-point shots, and 11 for 12 in free throws. Mortensen also led the team with nine total rebounds.

Amaryssa Orozco went 6 for 13 in field goals, bringing in 15 points for the Vikings, followed by Maegen Ford with 10. Orozco went 3 for 3 in free throws. Orozco and Ford brought down seven rebounds each for the team.

Viking Will McMenamin had a double-double, scoring a season-high 37 points and pulling down 16 rebounds for the team. He went 15 for 22 in field goals, shooting 68 percent, and went 7 for 8 in free throws. McMenamin also had three blocked shots.

Senior Stephen Gary, playing in his final home game for the Vikings, pulled down 15 points, going 5 for 16. Gary had eight rebounds, tying with Viking Caesar Santana. Santana added eight points for the team.

The Vikings teams next face St. Michael and Mayer on the road before heading to the regional playoffs Feb. 5-8.