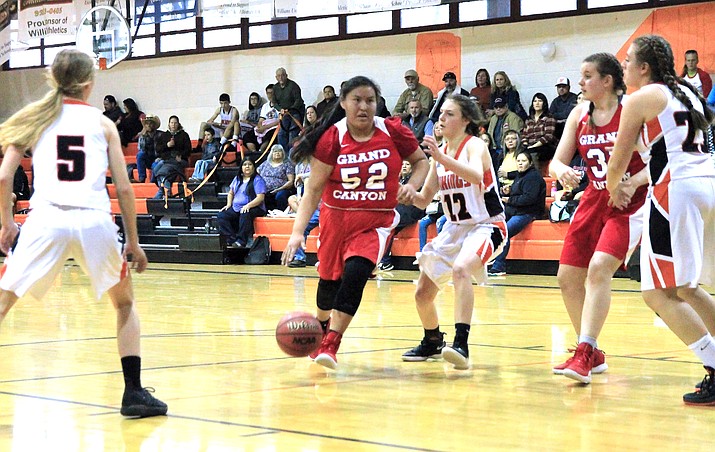 Alana Keebahe drives the lane during the Lady Phantoms’ 66-63 in over the Williams Lady Vikings Jan. 25. (Wendy Howell/WGCN)

GRAND CANYON, Ariz. — The Lady Phantoms coasted for three quarters in the Jan. 25 game against the Williams Lady Vikings, but the game came down to the final moments of the game as junior Cayli Miles sank a clutch three-pointer for the road win, 66-63.

Miles led the Lady Phantoms with 30 points, 18 of which came from downtown; she also went 6-for-6 from the free throw line with three steals. Keebahe scored 17 points and grabbed six rebounds, while Kara Austin and Makiah Kennedy crashed the boards for a combined 22 rebounds.

Miles led all scorers with 27 points and five offensive rebounds, followed by Savannah Longhoma with 11 points and Maria Dugi with 10 points. Sherice Keevama had five points, Kennedy had four points and Anlylian Moquino had three points. Austin, Keebahe and Natalie Ramos all had one point apiece. Freshman Ariel Morris led the Lady Phantoms in rebounding with five. 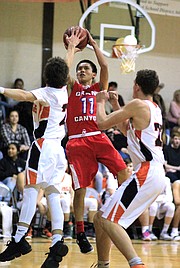 Phantom Cordell Bob drives to the basket during the Jan. 25 game with the Williams Vikings. (Wendy Howell/WGCN)

The Phantoms lost a game on the road to the Williams Vikings Jan. 25 after failing to find an answer for Will McMenamin, who scored more than half of the Vikings’ points. The game was tied at 10-all after the first period before the Vikings hit a 10-point run over the Phantoms in the second. Coming out of the locker room down by 10 points the Phantoms rallied to keep pace with the Vikings in the third, but were unable to make a dent in the Vikings’ lead, outscoring them by only one point. Scoring slowed in the final period as the Vikings outscored the Phantoms by seven points to win the game 69-53.

Aleryn Reid tallied 29 points, three assists and three steals, followed by Melakai Longhoma, who recorded a double-double with 10 points and 10 rebounds. Cordell Bob had six points and Rufus Keebahe had four points; Markeith Donley and Elijah Dugi rounded out the scorers with two points each. Longhoma and Dugi combined for 17 total rebounds, including 10 offensive rebounds.

The Phantoms notched another win over the Mayer Wildcats the following day at Grand Canyon in a hard-fought game with consistent scoring across the board. The Phantoms were outscored by the Wildcats in the first quarter but came back in the second, earning a one-point lead heading into the locker room. Scoring was sluggish in the third quarter as Mayer regained some momentum, with the Phantoms only scoring 11 points. However, the Phantoms fought back hard in the final frame, outscoring the Wildcats 24 to 13 to take the win, 63-58.