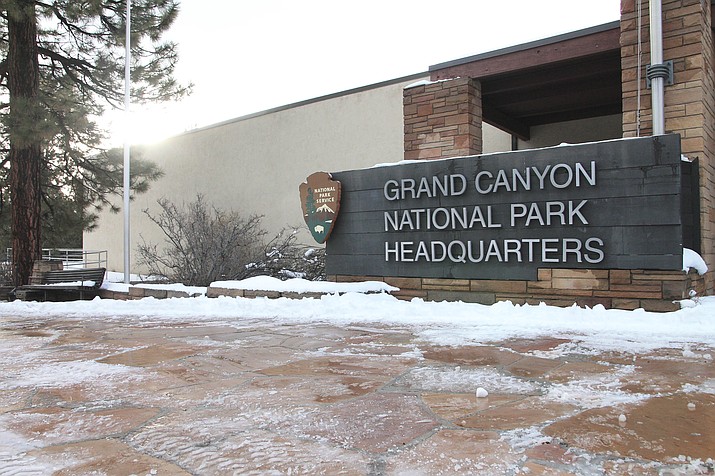 Grand Canyon National Park headquarters is now open after a temporary deal to fund the government through Feb. 15. (Loretta Yerian/WGCN)

GRAND CANYON, Ariz. — Yielding to mounting pressure and growing disruption, President Donald Trump and congressional leaders have reached a short-term deal to reopen the government for three weeks while negotiations continue over the president's demands for money to build his long-promised wall at the U.S.-Mexico border.

Following the enactment of the continuing resolution, which will fund the government for about three weeks, staff at Grand Canyon National Park will resume regular operations, including opening visitor centers, offering ranger programs, opening permit offices and collecting fees at entrance stations.

Park spokeswoman Emily Davis said the park is taking a phased approach to reopening visitor services over the next several days.

"The number one priority is helping our employees return to work safely," she said. "We are ready to work and we're taking things one day at a time."

Davis said park staff is also making visitor services a priority by reopening the visitor center. Some services such as ranger programs could be delayed as employees continue to return to work.

Because law enforcement patrols and building checks were performed during the duration of the shutdown, Davis said damage to park resources and structure was limited, and crews will work to repair small issues like frozen pipes in the coming days.

“Grand Canyon National Park appreciates the partnerships we have with Governor Ducey, the State of Arizona, Arizona State Parks and Trails, Grand Canyon Conservancy, and the northern Arizona community. The protection of Grand Canyon’s natural and cultural resources is our shared responsibility and a commitment to every American, every visitor, every day,” said Deputy Superintendent Lisa Carrico.

“We also need to extend our gratitude to our in-park business partners and neighbors in the town of Tusayan for providing support to our employees and community. We are a compassionate, connected community and together we showed our strength during the shutdown,” said Incident Commander Matt Vandzura.

Grand Canyon National Park’s employees are ready to return to work and look forward to continue to serve the American people and welcome visitors to their national parks.

After saying for weeks that he would not reopen the government without border wall money, Trump said he would soon sign a bill to re-open the government through Feb. 15 without additional money for his signature campaign promise. He said that a bipartisan committee of lawmakers would be formed to consider border spending before the new deadline.

Trump and the Democrats in Congress had remained at odds over his demand that any compromise include money for his coveted border wall.