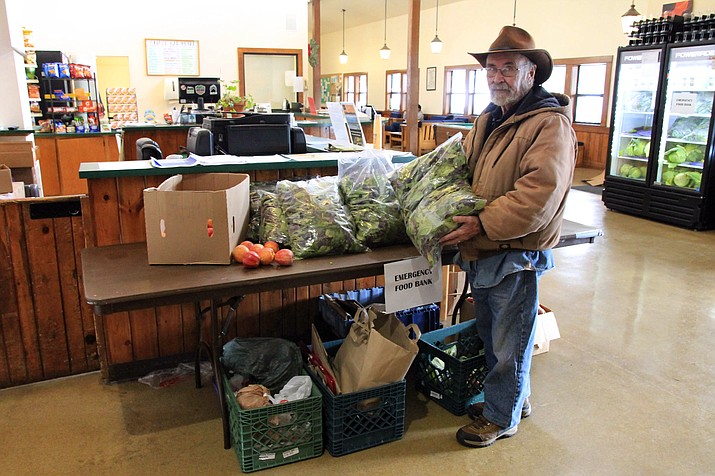 Community Leader of the Year Mike Scott stands in front of an emergency food bank established at the Grand Canyon Recreation Center to help federal employees and community residents affected by the government shutdown. (Loretta Yerian/WGCN)

GRAND CANYON, Ariz. — Sometimes, remote communities struggle, whether it’s with housing, education or meeting residents’ basic needs. During these times, members of the community often step up to provide assistance for those in need, including Valle retiree Mike Scott.

Scott, who with his wife, decided way back in 1988 that they would retire to the Grand Canyon area, was named Grand Canyon's Rotary’s Community Leader of the Year for 2018 for his dedication to easing the food insecurity for many of the area’s youngest residents. He helped facilitate a partnership with St. Mary’s Food Bank, which already provides monthly support for Grand Canyon, Tusayan and Valle families, to take on an urgent need: feeding children who may not have regular access to food once school isn’t in session.

Scott said the idea for the program started near the end of 2017, when Grand Canyon Chief Ranger Matt Vandzura contacted him about the number of children who struggled with food access in the community.

“He said, ‘do you realize that somewhere between half to two-thirds of the kids at the school are on free and reduced-price lunch?’” Scott said. “I didn’t realize it, so my church board and the local Church of Jesus Christ of Latter Day Saints got together and we did sandwiches two days a week.”

Seeing progress being made, Scott then got in touch with St. Mary’s Food Bank about setting up a trial program to serve sack lunches to any child under 18 five days a week.

“After that, we saw some things we could and couldn’t do,” Scott said.

Fast forward to 2018: Scott and St. Mary’s partnered again to provide the Summer Café, an expansion of the previous year’s program that included not just sites in the national park, but also in Tusayan and Valle. The program was a resounding success.

For community residents, that success equaled 1,862 meals served to children over a two-month period in the summer. Scott praised the national park service, the Town of Tusayan, STILO, St. Mary’s Food Bank and many others for coming together to work out a solution to help serve the most vulnerable.

“In this day and age of people not always being kind to one another, this community has proved that you can pull together, put differences aside for a common goal,” he said.

Although much of Scott’s energy has been focused on feeding children, he went to work again as soon as the recent government shutdown took effect, helping to establish an emergency food bank at the Grand Canyon Recreation Center to help federal employees forced to go without paychecks. Dry staples, as well as produce and dairy product donations were made daily, and concessioners like Xanterra and Delaware North also donated hygiene products and coolers to store the food.

Around the midpoint of the shutdown Jan. 16, Scott said about 4,000 pounds of food had been distributed through the emergency food bank.

He even remembered the furry residents.

“Several of the rangers have animals, so I was able to get a donation from PetSmart in Flagstaff of dog and cat food,” he said.

Although the emergency food bank was set up for NPS employees affected by the shutdown, Scott said other community residents were also using it, which is fine by him.

“After reading and looking online, I found out we have about a 15 percent poverty rate — this was a couple of years ago — in the canyon,” he said. “The national average using the same criteria was about 7 percent, so it’s double the national. If somebody comes in and is hungry and can take something, they’re welcome to do that.”

Scott said he also found out that residents needed to be able to pick and choose which items to get, unlike the traditional pre-packed box of goods available through St. Mary’s other distribution sites.

“It’s not because they’re fussy, but because not all of them have refrigerators to store things or appliances to cook on,” he said.

Now that the shutdown is over, Scott isn’t resting on his accomplishments. He’s been in discussions with NPS to open a permanent food panty within the park. The food will be supplied by St. Mary’s and those in need will be able to choose what they need from a store-like environment. The food pantry will be set up as a non-profit organization and Scott said several concerned community members have already agreed to be on the board, and Arizona Public Service (APS) provided pro-bono legal services to draw up the organization’s incorporation papers.

“When all of this is done, there will be a food site in Tusayan, one in Valle and one here in the national park,” Scott said. “The entire community has really banded together behind these food programs. When I knock on the door and ask for something, I have yet to have anyone turn me down.”

Scott credits his lifelong inclination to help people and information he learned as business owner with helping him succeed in his endeavors.

“When you hire people at or near the entry-wage level, you learn what kinds of problems they have,” he said. “When I came here as a retiree with that as a background, to me it was the most natural thing to continue to be passionate and use what I’ve learned.”

He also said serving the community is an important part of his retirement — it helps keep him active because there’s always something to do.

“I’m getting as much out of this as I’m putting into it,” he said.