Changes ahead for Williams schools administration 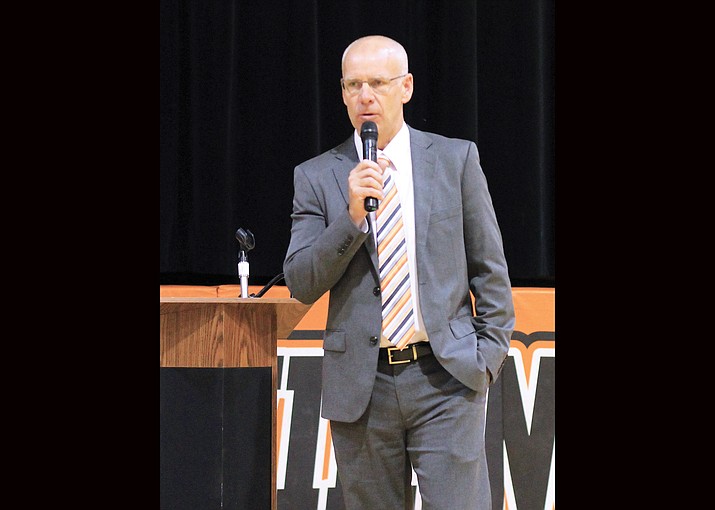 Rick Honsinger is stepping down as principal at Williams High School. (Wendy Howell/WGCN)

WILLIAMS, Ariz. — It has been four years since Rick Honsinger stepped into the dual role of superintendent and high school principal for Williams Unified School District, and he now says it’s time to step back. At the end of the 2018-2019 school year, Honsinger will resign as the principal while continuing as superintendent part-time.

Honsinger plans to officially retire, but will be able to continue in a 20-hour per week part-time role as the WUSD superintendent.

“We think it’s going to go well,” said WUSD governing board president Ann Wells. “He’s been a good principal and he’s a good superintendent and we’re looking forward to this new direction and keeping him on board.”

Honsinger came to Williams in 2015 from Mogollon High School where he was a math teacher and principal. Honsinger initially applied for just the high school position, but after the WUSD governing board saw his application they asked him if he was interested in a dual position as principal-superintendent.

“It was a good thing to be able to step into Williams, have these two positions and have Dr. Morrison come in at the same time as the principal of WEMS (Williams Elementary-Middle School),” Honsinger said. “There were a lot of team decisions and together I think we’ve made some good changes here.”

Wells said she believes the schools are in a better place under Honsinger than they were four years ago.

“I think that students and employees feel valued and I think he’s been a strong leader for us,” Wells said. “I think there’s been a tremendous amount of positive movement — our school grades have climbed.”

Wells said the district will start searching for a new high school replacement as soon as possible.

“We are going to be internally and externally searching for a full-time high school principal,” Wells said. “We’ll be posting that soon.”

With a new principal taking the helm in the fall, Wells said it will be beneficial to have Honsinger still in place as superintendent.

“We feel good about him being able to mentor the new principal who comes in," Wells said. "He will be excellent for that since he was a principal at Mogollon before coming here. He has a lot of experience in administration and at being a high school principal. I think it will serve the district well.”

As for Honsinger, he is looking forward to semi-retirement, but will miss his time as principal.

“I think being a high school principal is one of the hardest, if not the hardest, jobs in education,” he said. “But it is also one of the most rewarding. There are a lot of things that fall on my plate — you never know what’s going to come on a given morning. But when you go home and you think about some of the successes you had that day — the movement that you made- it makes it all worthwhile.”

Honsinger said despite his semi-retirement, he will still be available to help with the teaching load if necessary.

We have two math teachers (at the high school) and we have one more class than the two can handle,” he said. “If the need is there, I would be glad to do it again. It’s fun to keep your foot in the teaching world and be able to relate to the teachers. I really like math, and I really like — teaching math and being able to make a difference with the kids.”

And with only working 20 hours per week, Honsinger is eager for some down time.

“I’m hoping to be on my bike more, that’s the number one thing more than anything else,” he said.