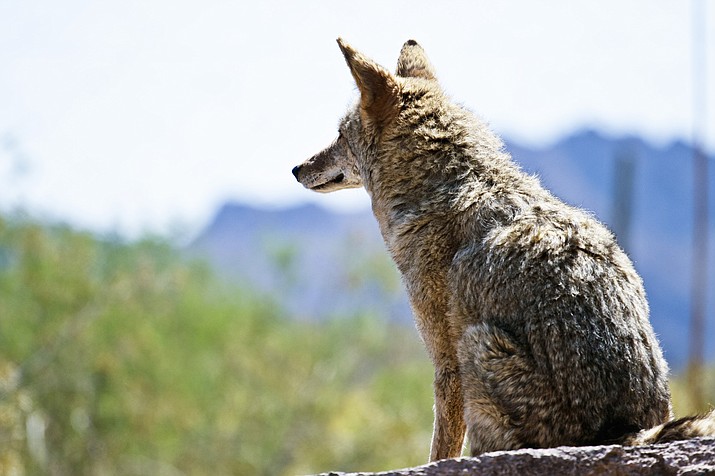 Animal rights activists and concerned Arizona residents are petitioning Coconino County Board of Supervisors to sign a resolution against wildlife hunting contests. Some hunters believe these contests are a sustainable and necessary way of controlling coyote populations. (Photo/Adobe stock)

WILLIAMS, Ariz. — Is calling an animal and killing it in a contest a method of hunting and way to help manage coyote populations, or is it a blood sport and ruthless means to slaughter a wild animal?

That’s the question posed to game managers and Arizona residents and like all questions there’s two ways to look at it.

Hunting in Arizona is managed by the Arizona Game and Fish Department. According to the AZGFD, around 13,000 hunters take an average of 30,000 and 40,000 coyotes annually. Most of these animals are taken while “varmint calling,” while others are taken while hunting other game or as opportunities arise.

Hunting coyotes is legal and has a year-round open season. To legally hunt a coyote, a hunter needs a hunting license, the hunter must use a firearm or bow that is legal in the unit being hunted and the individual must hunt in an open area — meaning public land or private land with permission. There is no bag limit on the number of coyotes that can be harvested by a hunter.

Those who hunt under the regulations set forth by AZGFD are within their legal right. Game and Fish does not regulate hunting contests. Hosting or participating in hunting or calling contests is legal.

“The Game and Fish Department Commission does not regulate any type of contest regarding the take(ing) of wildlife,” said Tim Holt, field supervisor for AZGFD in the Flagstaff Regional Office. “As long as they have their license, they’re in a legal area and they have legal methods of take — firearm or archery, then they are legal under the Game and Fish regulations.”

Most hunting contests are fundraiser events with proceeds going toward scholarships and local clubs, or are memorial hunts contributing to family members.

One northern Arizona rancher has hosted coyote calling contests for over a decade. This event started as a memorial hunt and grew to more than 130 teams at one time. This year the event hosted 112 teams, with each team comprised of two to three hunters. The hunt was statewide and lasted for a day and a half, ending on private property where winners were announced, raffles were held and a lunch was served.

“This is a memorial hunt and left over proceeds I donate to the Cowpuncher Crisis Fund a lot of times (or) families that need it due to a death or illness. We donate to scholarships — it’s just a big fundraiser, a once a year fundraiser,” the organizer said.

A call to end contests

But not everyone is OK with these contests. In the last several months, animal rights groups, including a coalition known as I AM WOLF NATION in partnership with Project Coyote and some Arizona residents, have been working to end the contests.

Panelists answer questions following a screening of the documentary Killing Games: Wildlife in the Crosshairs shown at Coconino Center for the Arts Jan. 24. (Loretta Yerian/WGCN)

Last week, a screening of the documentary “Killing Games: Wildlife in the Crosshairs” was shown in Flagstaff at the Coconino Center for the Arts followed by a viewing of an undercover video taken at a contest. Immediately following the films, a panel discussion was held featuring Matt Francis, program associate for Project Coyote; Joe Trudeau, southwest advocate for the Center for Biological Diversity; Amber Fields, hunter and conservationist and Emily Renn, executive director of the Grand Canyon Wolf Recovery Project.

Panel moderator and co-founder of I AM WOLF NATION, Betsy Klein, said the purpose of the film was to send a message and raise awareness.

“To get a sense of the violence associated with these, and hopefully the message will be clear as to why we would like your support in trying to end these in the state of Arizona,” she said at the screening. “We’ve been on a campaign since last October educating the public with events like tonight.”

In November 2018, the Dewey-Humboldt town council passed a resolution opposing the contests and in December the Yavapai County Board of Supervisors voted unanimously for a proclamation in opposition.

In a recent press release, Project Coyote stated that “the National Coalition to End Wildlife Killing Contests, a growing alliance of more than 30 state and national wildlife and animal protection groups, along with local citizens, will pursue similar policy changes at the state and local levels across the nation in 2019.”

“We’ve been working with Flagstaff City Council and Coconino Board of Supervisors to pass a resolution to oppose them in those areas, now granted that doesn’t mean we can ban them legally, but as constituents of the state it sends a very strong public message that the majority of Arizona residents are joining this campaign and using their voice to say, ‘Enough, no more, we don’t want this on our public land,’” Klein said.

Jim Parks, Coconino County Supervisor in District 4, said the board is currently considering a resolution against the contests.

“We, as the board of supervisors have no authority to make an ordinance against it, that’s not our purview,” he said.

Parks said he does not support the resolution.

“Is it (coyote calling contests) a really wonderful thing? Probably not. There’s a lot of things about it that are not appealing to civilized people. The fact that you call the coyotes in — that’s still fair chase, in my opinion because just like any other way, it’s hunting,” he said. “What they (the contests) are for is to try to bring the number of coyotes down in a certain area.”

Game and Fish keeps data on wildlife harvests through annual hunter questionnaires. Around 15,000 hunters are asked questions about predators and small game harvests on these questionnaires.

“That’s how we track the harvest of coyotes,” Holt said. “That harvest has been stable. It hasn’t shown an increase or decrease of harvests of coyotes.”

In response to a question raised at the screening, Joe Trudeau, southwest advocate for Center for Biological Diversity and a panelist at the film screening, said contests are not an effective way to manage populations.

“That’s just a load of hogwash really,” he said.

According to Trudeau, there only a few areas of the AZGFD’s pronghorn conservation plan for Central Arizona that mentions predation by coyotes. He said it is not identified as the leading cause.

“In fact, the idea of managing the coyote population because they are destructive on elk and deer and pronghorn has absolutely no scientific credibility and it wouldn’t be an issue — coyotes eating pronghorn wouldn’t be an issue, if the pronghorn weren’t already stressed by roads and fences and poaching and urbanization and all the other issues,” he said.

“It’s the only defense, people who advocate for killing predators ... can possibly come up with,” Trudeau added. “But there’s no substance to it.”

A hunter from Williams, who wished to remain anonymous because of the potential for backlash by anti-hunting groups, said he has been a contest participant in northern Arizona for more than 10 years. He said the hunts help keep the coyote population in check which in turn helps increase big and small game throughout the rest of the year.

“It keeps the coyote population down and in turn brings the deer, elk, antelope and javelina population up,” he said. “The more coyotes, bobcats, mountain lions we have, the fewer those populations become.”

Having hunted since he was 11-years-old, he said for him, hunting is a lifestyle. He views the coyote contests as a way of helping keep a balance in nature.

“It means a lot to me — that the deer and elk populations are there and the (deer and elk) populations have gone down drastically… they’ve dropped tremendously since twenty years ago,” he said.

Amber Fields, a hunter and conservationist from Prescott, Arizona also grew up hunting. She said the contests give hunting and the hunting industry a bad name.

“These contests are giving hunting a bad name and they need to end or else true hunters won’t be able to hunt for their families in the way that we have for our entire human history,” she said.

Other than through hunting, Game and Fish does not actively manage coyote populations.

This process of removal is conducted through a federal contract with the Animal Plant Health Inspection Service, an agency of the United States Department of Agriculture. It is completed both on the ground and by aerial methods.

“Hunters take an additional harvest of coyotes out of the population that doesn’t, at least at this time, doesn’t appear to affect the population,” Holt said.

Kevin Overfield, owner of Juniper Creek Outdoors in Williams, said a benefit to having contests that promote hunter harvests is a boost of revenue in local businesses and through sales taxes.

“Whenever you have these contests you have to have a hunting license and then hunters buy ammo and gear …. that is all going toward wildlife,” he said. “A portion of it goes toward wildlife conservation.”

As for putting up prizes for contestants, Overfield was not fazed.

“If you want to get a bunch of people involved and sign up for $50 a pop, you’ve got to have something to give them — there’s got to be something there,” he said.

Overfield said it is not the goal of most hunters to eradicate coyotes.

“We don’t want coyotes gone,” he said. “We don’t want to annihilate them or wipe them out, we don’t want that at all. We have a good time seeing them and hunting them. All we’re wanting to do is keep the coyotes in check.”

“We can’t just pin the blame on all hunters as a population of people because they are going to have to be allies in stopping these contests,” he said.