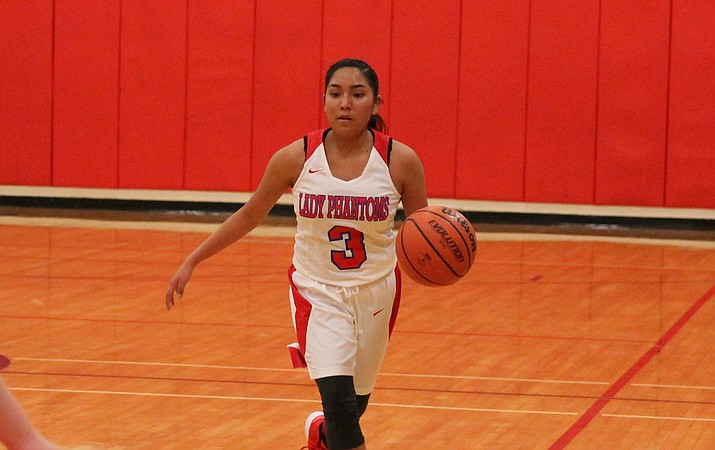 Sherice Keevama sets up the offense for the Lady Phantoms in a previous game. (Erin Ford/WGCN)

Sherice Keevama led all scorers with 11 points and three steals while Kara Austin made herself at home in the paint, grabbing 17 rebounds and scoring six points. Ten Lady Phantoms put points on the board, including Alana Keebahe with 8; Makiah Kennedy, Natalie Ramos and Maria Dugi with 6 apiece; Calley Scheller and Ariel Morris with 4 points each and Betsey Sullivan and Anlylian Moquino with a field goal apiece.

The Lady Phantoms faced the St. Michael’s Cardinals at home the next day, facing a scoring threat in the first quarter before kicking it into high gear for the remainder of the game.

The second half was a different story — the Lady Phantoms came out at the half with a new energy, outscoring the reeling Lady Cardinals 18-6 in the third quarter before dropping 20 points in the final period to take the win 62-50.

Junior Cayli Miles and sophomore Savannah Longhoma combined for 47 points in the effort, followed by Austin with her first double-double, scoring 10 points and swiping 10 rebounds. Keebahe contributed three points and seven rebounds from the bench and Kennedy added a basket.

The Lady Phantoms will travel to Williams for a regional game Jan. 25.

The Phantoms traveled to Flagstaff to face the BASIS Yeti Jan. 18. The team was without inside presence Melakai Longhoma, but managed to hold pace with the Yeti in the first half before lagging behind in the second.

After trading baskets during the first half, the Phantoms went into the locker room at the half up by a single basket, with senior Aleryn Reid and sophomore Cordell Bob leading a consistent scoring drive to keep the Phantoms on top. Junior Rufus Keebahe provided an energetic defensive effort after sitting out previous games with an injury. Scoring fizzled in the second half as the Phantoms struggled to keep up the energy, managing only 14 points in the second half. The Phantoms went on to lose the game 52-43.

The Phantoms faced the St. Michaels Cardinals the following day on their home turf, with a strong performance by Keebahe driving them to a 51-47 win Jan. 19.

The Phantoms came out of the gate fast in the first period, holding the Cardinals to a single basket while scoring 15 points. The scoring fell off in the second, however, and the Phantoms headed into the intermission up by only one point. The team was able to get back on track after halftime, outscoring the Cardinals 16 to 9 before tapering off again the final period to hang on for a four-point victory.

Keebahe sparked the Phantoms’ offense, leading all scorers with 19 points and 10 rebounds, followed by Bob with 13 points and Reid with 9. Dugi crashed the boards for nine rebounds and contributed 8 points in the win. Carlos Briones rounded out the scorers with 2 points.

The Phantoms will travel to Williams for a regional game Jan. 25.