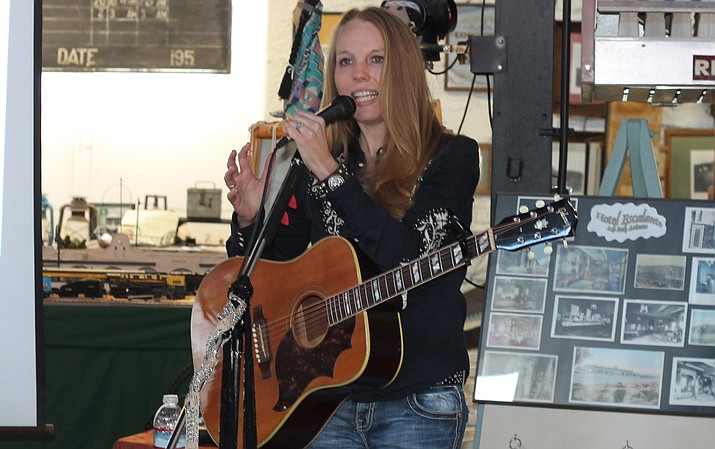 Meagan Gipson shares songs of her family's experiences as early settlers and entrepreneurs at the Grand Canyon Jan. 18 at the Ash Fork Route 66 Museum. (Erin Ford/WGCN)

ASH FORK, Ariz. — Swaying lightly before a small crowd in the Ash Fork Route 66 Museum, Meagan Gipson strums her guitar as photos, mostly black and white, scroll slowly on a screen behind her. The faces peering out from the photos are her family, and through her songs, she is telling their stories.

Gipson and her mother, Debbie, are the creators and orchestrators of the Grand Canyon Project, a literary and musical collaboration that tells the stories of some of the Grand Canyon’s first settlers through letters, diaries and other first-hand accounts passed down through the family. Meagan is the great-great-granddaughter of William Wallace Bass, one of the canyon’s first entrepreneurs and one of its most outsized personalities.

One of the first to recognize the canyon for both its tourism and mining possibilities, Bass set up camps and led daring trips down paths into the canyon, all the while telling stories and inspiring a love of the unique region. Debbie said it was on one of these tourism escapades that he met his wife, Ada Diefendorf, a classically-trained musician from New York.

And although Debbie, through family documents, relayed that Ada was not as wholly in love with the canyon as Bass, she did raise her three children on the rim, sparking a lifelong obsession within her oldest, Edith — Meagan’s great-grandmother — for the canyon’s undulating hues of blue and red.

“Edith was her father’s right hand,” Debbie told the audience. “She was leading tours down the canyon to the Colorado River at 10 years old, by herself.”

Eventually, Edith met and married a young, strapping Canadian immigrant named Bert Lauzon, who lived in Ash Fork for a time and whose son, Hubert, was also a member of the community. Although Bass and his wife at first forbid the relationship between Lauzon and Edith, they eventually relented and allowed the two to marry, although Edith was required to wait until she was 20.

“One month after Edith turned 20, they were married,” chuckled Debbie.

The intense relationship between Edith and Bert is the subject of one of Meagan’s most emotional songs, based on the many love letters the two sent each other while Edith was exiled to family members in California. The words come alive for Meagan, who chokes up a little afterward. The love that was so tangible in their letters and in their relationship with each other was sadly short — Edith died just eight years later in Phoenix, far from her beloved canyon.

The story of Bert and Edith comes to life in both song and word, along with other long-passed-down tales. The book, “Stories the Canyon Keeps,” and Meagan’s album, “100 Years Away,” are designed to be experienced together, with music complementing the stories and prose setting the reader up to experience Meagan’s original songs.

Both can be purchased through the Grand Canyon Project’s website at www.grandcanyonproject.com.