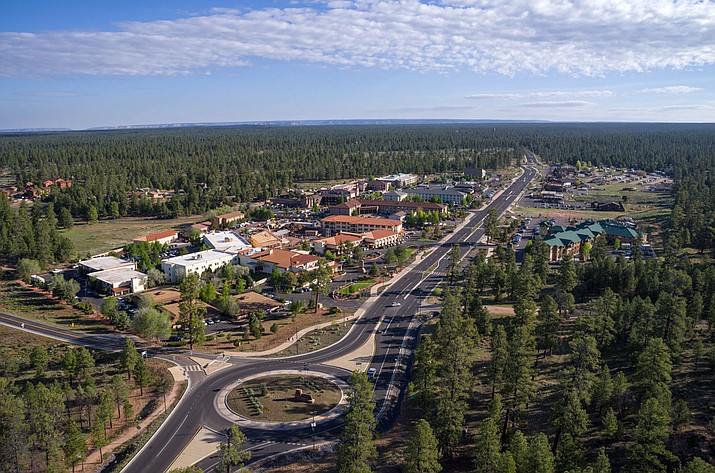 TUSAYAN, Ariz. — When it comes to building a safe development, water reigns supreme. Specifically, a lot of water, moving at high speeds, toward communities and infrastructure.

That’s the concern of both the town of Tusayan and Coconino County as negotiations continue over the fate of both the town and its progressing housing development northeast of town. Lucinda Andreani, Deputy County Manager for Coconino County, said the county flood control district voiced its concerns over the project as early as April 2018, when they became aware of plans to build affordable housing at Ten X Ranch, part of which is located in a designated floodplain.

“Last April we became aware of the development and told the town manager they would need to apply for a permit then,” Andreani said. “In July, we found out that they started construction and were in violation. We then filed a lawsuit in Superior Court to stop construction until they obtain a permit.”

Tusayan Town Manager Eric Duthie said in April the county sent the town an email asking them to tell the county about their project (Ten X).

According to Duthie, the town did not receive a follow-up request for any specific information about the development from the county at that time.

“In July they told us, ‘you need a permit,’” Duthie said.

At a special meeting Aug. 27 the Tusayan council passed an ordinance assuming the duties as floodplain administrators.

Arizona state law requires a permit to ensure that any time someone makes changes to their property, be it developers or private citizens, no properties downstream from those changes would be impacted. Andreani said that means the prospective changes cannot alter the direction or characteristics of the water flow. As an example, she said a homeowner who has water flowing through their property couldn’t build a structure to divert that water to, say, a neighbor’s property.

Since part of the Ten X development is in a floodplain, the permitting process must be followed to make sure none of the surrounding land — including the town itself — is negatively impacted.

“The purpose is not to stop development, but if development takes place, the design has to account for water flow and take mitigation steps,” Andreani said.

Duthie contends the town acted in good faith when it began physical construction at the site.

“On Sept. 7 is when we actually started moving dirt at the site, after the town approved (the resolution to take over floodplain administration duties),” Duthie said.

Tusayan resident Clarinda Vail filed a petition with the county to have a referendum placed on the ballot denying the town council’s actions. That item will be on the ballot in May.

Duthie said the town received word in late September that the petition had been validated, and construction continued while the town had conversations with the county regarding the permit. Andreani said floodplain administration did rest with the town once the resolution passed, but that action was suspended once the referendum petition became valid.

Should the referendum — which states the town should NOT administer its own floodplain — not receive support from residents, Andreani said the council’s resolution would be reinstated, and control of the floodplain would once again be transferred to the town. At that point, the town must notify the Arizona Department of Water Resources, which serves as the state’s liason to the Federal Emergency Management Agency (FEMA) and the county would no longer assume any control over projects or permits. Should the town opt out of floodplain administration at any point, the county would once again take over, Andreani said.

Once the county filed the lawsuit, Tusayan Mayor Craig Sanderson and Andreani agreed that construction would cease voluntarily while the town worked to comply with county requirements.

Whose responsibility is it to gather data?

Andreani said the county has been concerned about a lack of a current floodplain analysis since around 2015, when a hydrologist searching for other studies of the area indicated that the flow rate of a flood event would likely be higher than the previously accepted 1,240 cubic feet per second (cfs).

“We’re not satisfied with historical reviews,” Andreani said, noting that the last fairly comprehensive study of the region was completed in the mid-1960s.

Since then, she said, technology has improved and new comprehensive studies, such as a Flow 2D study, should be completed. A Flow 2D study is one of the most accepted flood study methods, and is the most accurate.

As long as Coconino County is administering the floodplain, it is responsible for reviewing and providing building permits. It has the power to approve, alter or deny development projects. The cost of providing the data, however, falls on the project owner. Andreani said the county won’t pay to have studies done unless it involves a county project.

That leaves the developer, in this case the town of Tusayan, the responsibility of paying for the study. Sanderson said the town had already undertaken this step a few months ago under the notion that the town would soon become its own floodplain administrator. The intention was to be able to speed up the Ten X housing development by collecting data and acting on it quickly.

“When we talk about doing the Ten X affordable housing, for example, we said, ‘ok, we’re going to take over floodplain so we can do a fast track on the housing,” Sanderson said.

As for the permitting process, Duthie said conversations were ongoing with the county about obtaining the information needed for the permit process, which will then be reviewed by both the county hydrologist and engineer, as well as an independent third party engineering firm.

Once mitigation actions are agreed upon and completed, the Coconino County Flood Control District can issue a permit and building may resume.