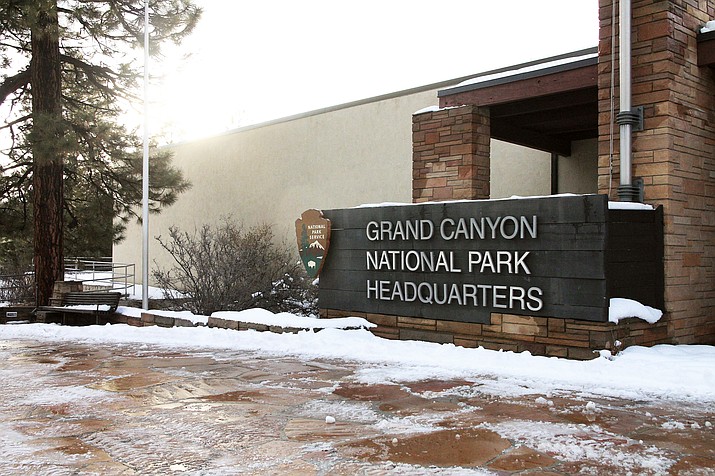 Doors remain closed at Grand Canyon National Park Headquarters on the South Rim as a federal government shutdown begins its fifth week. The shutdown is currently the longest running shutdown in U.S. history as Democrats and Republicans remain divided on a budget and funding for the construction of a border wall between Mexico and the United States. (Loretta Yerian/WGCN)

GRAND CANYON, Ariz. — Federal emplyees have not received a paycheck in over a month, including national park employees on the South Rim at Grand Canyon National Park, and this, along with the growing impacts to the park, is starting to weigh on many employees.

Speaking as a federal employee and not the deputy superintendent at Grand Canyon National Park, Lisa Carrico said the government shutdown has created uncertainty for many park employees.

“I think in general what I’m hearing and what I’m feeling myself is just a lot of uncertainty because we just don’t know,” she said.

Carrico said that uncertainty is difficult to live with day to day and while park employees have been shown a generous amount of support during the shutdown, it’s still a waiting game.

“We don’t know what is going to happen next,” she said.

Even with the support of local and state entities, the impacts of a shutdown and not receiving a paycheck are disheartening and not having the option to do a job employees have been trained and hired to do is agonizing for some park employees.

“For me, personally, the disruption — not being able to do the job that I’m dedicated to doing and watching staff and being concerned about staff, it’s a difficult time,” Carrico said. “We signed up to work. We want to get back to work.”

Some park partners, like Grand Canyon Conservancy — the official non-profit partner of Grand Canyon National Park, have stepped up to help with the visitor experience.

Additional assistance for park service families has come from within the Grand Canyon community. The local food pantry is currently offering perishable and non-perishable items and APS is offering bill assistance through the help of Coconino County.

“The outpouring from our community here, locally, I think is really heartwarming,” Carrico said. “Every little bit counts.”

According to Carrico, the national park is working with a skeleton crew, consisting primarily of essential employees that include emergency response teams and those who provide services like snow plowing and trash pick-up.

“We are not able to do the full services that we will be when we open back up again,” Carrico said.

As of last week, front gate employees — fee collectors, were asked to go back to work. They are not, however, collecting entrance fees.

Ty Labeth, supervisory visitor use assistant at Grand Canyon’s South Rim entrance, said fee collectors are primarily there to give visitors guidance and direction. Specifically, they are warning about inclement weather and snow and ice hazards on trails and roadways.

Ty Labeth, supervisory visitor use assistant works at the front entrance station on Grand Canyon's South Rim. National Park employees are giving information to visitors, however, fees are not being collected. (Loretta Yerian/WGCN)

“We are not collecting fees but at least we can provide visitors with information,” Carrico said.

The decision not to collect fees at the entrance stations was a directive straight from Washington D.C.

“The reason our entrance stations are open and the reason we have staff there is so they can provide important safety information to our visitors … collecting fees is not part of an emergency or human safety function,” Carrico said.

Additionally, the park was granted permission to access entrance fee funding to pay essential park employees and the state of Arizona has donated funding to provide trash pick-up and custodial duties at the park.

“What we have now provides basic services,” Carrico said. “Overall, I think the staff is doing a good job at providing those services.”

While park employees are able to provide service to visitors and oversee their safety, they have had to put on-going management plans and time-sensitive projects on hold.

Some of these include replacing the trans-canyon pipeline that provides drinking water on corridor trails and to the South Rim, finishing the management plan for a steadily increasing herd of bison on the North Rim and researching the California Condors that live in and around the Canyon, among others.

“This is the longest shutdown we’ve had in history. How it’s going to impact us moving forward — there are lots of questions. When we get funding and (are) back up again we’ll be working to identify what the priorities are and timelines and phasing things in so we can address the highest priority things first,” Carrico said.

The park is currently in a leadership transition after former superintendent, Christine Lehnertz, was reassigned amid a federal investigation into undisclosed allegations in October.

“There’s frustration, concern obviously, but overall people are making the best of it and helping each other and trying to get ourselves through it,” she said. “I am extremely proud to be part of this community and to be part of this group of federal employees…. If they’re exempted they’re coming to work and doing the things that need to be done to keep operations going, to serve visitors and protect resources, so I have a sense of pride about this,” she added.