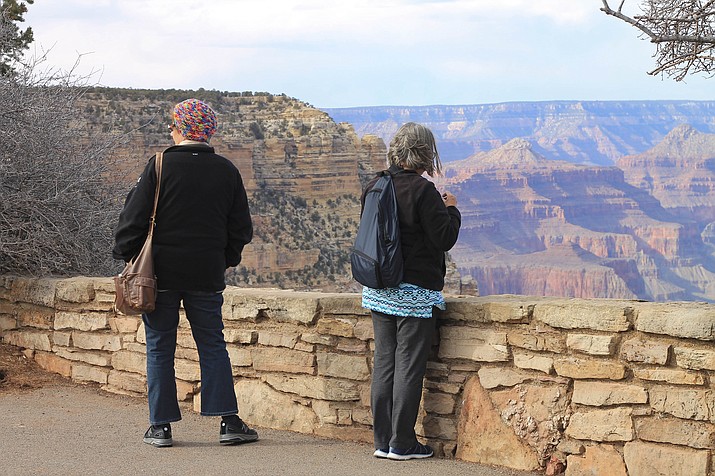 The Grand Canyon Protection Plan was put in place in Feruary 2018 to keep the park operational in the face of a government shutdown. (Erin Ford/WGCN)

WASHINGTON — President Donald Trump Jan. 14 rejected the suggestion that he temporarily reopen the government while negotiations continue on his proposed border wall, signaling no speedy resolution to the partial government shutdown now into a fourth week.

Leaving the White House for a trip to New Orleans, Trump said he had dismissed the proposal from Republican Sen. Lindsey Graham to reopen for several weeks and continue dealing with Democrats over Trump's long-promised wall on the U.S.-Mexico border.

As Congress returned to Washington for their second week of legislative business since House control reverted to Democrats, the shutdown hit Day 24, affecting federal workers and services with no end in sight. Trump has demanded $5.7 billion for his long-promised wall, while Democrats, who oppose the wall as both immoral and wasteful, insist Trump re-open the government before they negotiate border security.

From the White House, Trump argued that he alone was ready to negotiate, noting that a group of House and Senate Democrats were touring hurricane-ravaged Puerto Rico.

"A lot of the Democrats were in Puerto Rico celebrating something. I don't know, maybe they're celebrating the shutdown," Trump said.

Democratic House Speaker Nancy Pelosi and Senate Minority Leader Chuck Schumer were not on the trip to Puerto Rico. Pelosi spokesman Drew Hammill tweeted Jan. 14: "Speaker Pelosi has been in DC all weekend working from the Capitol."

Trump also targeted Pelosi and Schumer on Twitter, arguing that the shutdown "has become their, and the Democrats, fault!" Weeks ago Trump asserted he would "own" the shutdown and polls show that he is taking most of the blame.

Trump has kept Washington on edge over whether he would resort to an emergency declaration, citing what he says is a "crisis" of drug smuggling and the trafficking of women and children at the border. The president initially sounded as though such a move was imminent, but then pulled back. He has said several times since he first mentioned the idea in public this month that he prefers a legislative solution.

A key question is how much more time is Trump willing to give lawmakers. Graham, who spoke with Trump by telephone said the legislative path "is just about shut off" and blamed intransigence by Pelosi.

Park roads, trails and overlooks in Grand Canyon National Park have remained accessible since the beginning of the lapse in government appropriations thanks to support from the state of Arizona. Trash collection, custodial services, and snow removal will continue, as will public health and safety services using recreation fee revenue. Visitor services provided by park concessioners and other entities are also open, including lodging, restaurants and food service, grocery stores, retail, bicycle rental, concessioner-provided tours, and park shuttle operations.

“We greatly appreciate the generous contributions from the state of Arizona, which donated funding to help keep Grand Canyon open and accessible during the lapse in appropriations,” said Grand Canyon Deputy Superintendent Lisa Carrico. “The state helped provide access and basic services to Grand Canyon National Park visitors and residents.”

National Park Service officials have determined that by using Federal Land and Recreation Enhancement funds, the park can continue to provide the services for which the State of Arizona donated funds from December 22, 2018 to Jan. 11.

Some services at Grand Canyon may be limited or unavailable during the lapse in appropriations, including visitor centers, ranger talks and programs. All backcountry camping and Colorado River trips require appropriate permits. Anyone in violation of this requirement is subject to enforcement actions. New permits are not being issued and existing permits may not be amended during the government shutdown. Visitors with previously issued permits may proceed as permitted. entrance fees will not be collected.

Highway 67 to the North Rim of Grand Canyon remains closed for the season.

Some information provided by NPS.