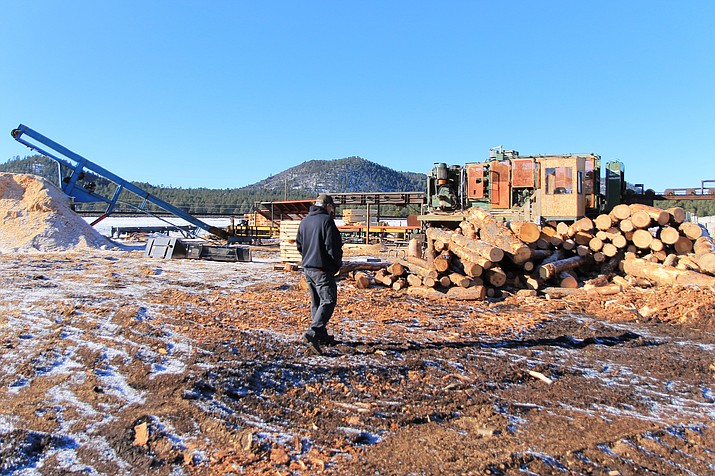 James Perkins, the CEO of Perkins Timber Harvesting and Perkins Natural Resources, walks by his new sawmill on his property on Garland Prairie Road Jan. 11. Perkins is looking to diversify his logging operations by milling his own wood. (Wendy Howelll/WGCN)

WILLIAMS, Ariz. — Finding trees has never been a problem for Jim Perkin’s logging company, but finding someone to buy them is another story.

Perkins, who is the CEO of Perkins Timber Harvesting, is not the only logger to run into the problem, but as a small family operation he has been able to diversify in order to survive.

The past few years Perkins has relied on the chipping and pallet markets to purchase his timber products, but as that market has become saturated, Perkins is turning to operating his own sawmill.

“We bought this mill last summer and my crew spent a few months getting it running,” Perkins said. “It sat idle in New Mexico for the past 8 years.

Perkins said purchasing the sawmill has allowed his company to diversify. He opened another company he named Perkins Natural Resources, which will process and market the cut logs.

“By putting in the mill we have created a market for our logs — it has created another stream of income for us,” he said.

The mill has already begun producing for the company, with cut timber being trucked out of state.

“The lumber is going to Mexico,” Perkins said. “A company out of San Diego is a broker and buys all of the lumber. The lumber will be used for pallets and in a brewery — I’m not sure what they use it for in a brewery.”

Perkins said the new sawmill is simple and efficient with four large electric motors and chippers that adjust to the prescribed size of the lumber.

“The operator looks at the log to see what is needed and pushes a button,” he said. “The chipper heads come into the log and chip a 4x4 out of it.”

The chips fall onto the green chain and onto the conveyor which creates a pile. The chips are then trucked to Gro-well in Phoenix to be bagged for places such as Home Depot and Lowe’s, Perkins said.

Perkins said last year was a struggle for his company as markets dried up and the weather hindered their operation.

“We had a bad year last year starting off because we had no markets,” he said. “We only had two feet of snow all winter and one of our markets had 500 loads on their yard ready for the snow.”

Perkins said he also lost money in small private operations where he bid too low on some projects.

“It’s a struggle,” he said. “We don’t have millions of dollars to spend.”

Perkins said he likes to get his income from timber harvesting and now lumber from the new mill. He said he contracts out for the trucking of the logs and the chips.

“I don’t like trucking, it’s a hazard,” he said. “There is no money in trucking.

Perkins said his company has just completed a timber sale with the US Forest Service and now will be working on a project for Arizona State Forestry.

“I pay a little for the wood, but they pay me for the cutting,” he said. “It’s a stewardship contract, but we get paid to cut it.”

Perkins said the method the USFS uses for timber sales has made cutting on those sales less profitable.

“The scale sales charge you by the ton and you have to weigh every load, it’s not very feasible, I don’t make any money,” he said.

Perkins said the advantage of a small timber operation is the ability to adjust and seek other avenues for revenue without much overhead.

“We’re survivors,” he said. “We like to keep it small, keep it simple.”