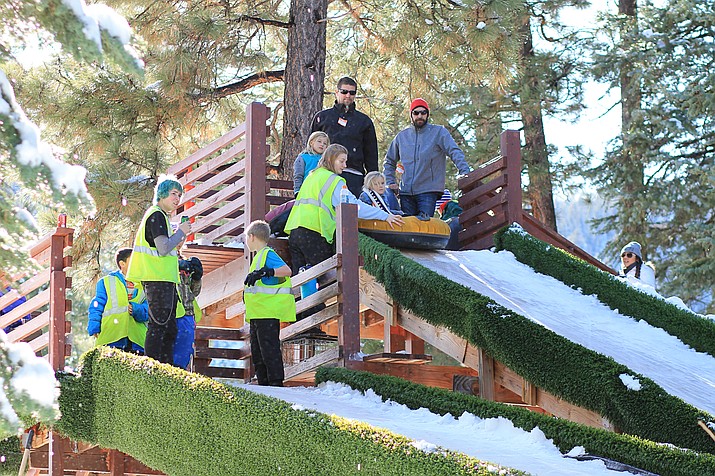 WILLIAMS, Ariz. — It has been a year and a half since Elk Ridge Ski and Outdoor Recreation area in Williams was purchased by Mountain Capital Partners, yet locals and snow enthusiasts have yet to see the gates open at the resort.

In October 2017, Mountain Capital Partners purchased the business from Tammy Fountain, who had operated the facility for the previous 12 years. With the lack of consistent snow, the resort had mostly been open for sledders and those seeking other snow play opportunities.

According to Arizona Snowbowl general manager J.R. Murray, Elk Ridge will be managed by Arizona Snowbowl, which is also owned by Mountain Capital Partners. In 2017, Murray said the plan for Elk Ridge was to replace the lifts and modernize the facility with intentions of reopening the ski slopes in the winter of 2018.

However, discussions are still ongoing with Kaibab National Forest as the owners seek approval and gain permission to operate the ski area. Murray said the ski area will not open during the 2018-2019 season.

“Arizona Snowbowl has completed the acquisition of the ski area assets and is currently working with the Kaibab National Forest staff to obtain a special use permit to operate the ski area,” Murray said.

Murray said discussions with the forest service are focused on previous levels of service and approved operations for winter recreation.

Removing the two existing surface lifts are high on the priority list while replacing one with a surface conveyor which has been purchased, he said.

Murray said Arizona Snowbowl is excited about the future for Elk Ridge ski area, however, more planning and discussion is required between the ski area and the Kaibab National Forest before the resort can reopen.

The purchase of Elk Ridge by Durango businessman James Coleman, who fronts Mountain Capital Partners, will be added to a collection of resorts owned by the company that include Purgatory Resort and Hesperus Ski Area in Colorado, Sipapu Ski and Summer Resort and Pajarito Mountain Ski Area in New Mexico and Arizona Snowbowl in Flagstaff.

The ski area will be the smallest resort owned by Mountain Capital Partners. Purgatory lies near Durango in southwestern Colorado and features 1,525 acres of skiable terrain with 94 trails and 11 lifts. Hesperus, also near Durango, is the smallest in the group with 60 acres, 26 trails and one chair lift.

Elk Ridge, located near Williams, has been a commercial ski and sledding area since the 1960s, offering 37-acres of terrain for beginner skiers and a groomed slope for tubing. Historically, the slopes of the mountain have been a favorite haunt of locals since the 1920s.

Elk Ridge is on a north facing slope of Bill Williams Mountain off the Perkinsville Road. The property operates under a special use permit with Kaibab National Forest.

The upper slopes of the ski area have not been open for many years and the platter lift has fallen into disrepair, he said.

Maintaining Elk Ridge as an affordable, family-friendly ski area is the focus for Mountain Capital Properties, and its intent is to restore the area to its historical and economic relevance to the Williams economy, he said.

Prices have not been disclosed for the upcoming winter season, but Mountain Capital Partners currently offers a Power Pass that allows unlimited skiing at Purgatory, Hesperus, Sipapu, Pajarito and Snowbowl. Murray said that pass will eventually include Elk Ridge, although he is not sure of the details yet.

Although each of the Mountain Capital Partners properties has snowmaking that allows them to stay open late in the season. The group did not reveal whether snowmaking would come to Elk Ridge.

Murray said Snowbowl will help with the oversight of Elk Ridge, providing operational and technical expertise.

Coleman has made a name for himself purchasing small, unique ski areas in the Southwest, where he often has a personal connection.

Although the price for the Elk Ridge purchase has not been disclosed, the group has invested $35 million in the five collective ski properties between 2015 and 2017 and is known for the quick infrastructure upgrades that came after each purchase.

The group sees potential in expanding the season for Elk Ridge. Coleman previously said he believes the area has potential to provide year-round activities such as mountain biking and hiking.

The group sees the purchase of Elk Ridge as a means to relieve the pressure on Flagstaff by providing snow play opportunities such as tubing, show shoeing, skiing and more at the resort. They believe the ski area will provide more opportunities for Arizona families and hope to open the area as soon as a special use permit is approved by the forest service.