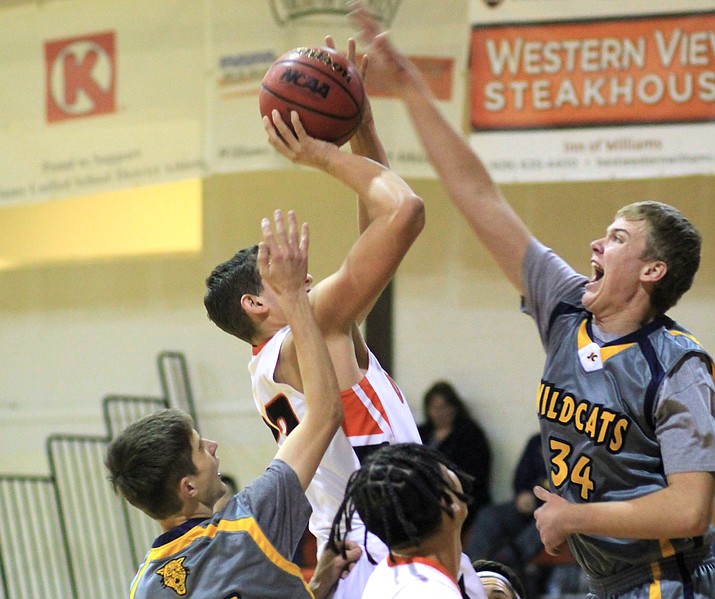 Viking Will Mcmenamin takes a shot over Joseph City’s Jay Edwards Jan. 5 in Williams. The Vikings handed the Wildcats their first region loss in the 75-64 game. (Wendy Howell/WGCN)

WILLIAMS, Ariz. — The Vikings returned from Christmas break with a vengeance as they handed the Joseph City basketball team two solid losses Jan. 5. 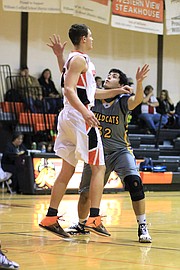 Viking Will Mcmenamin tries to get open in the key. (Wendy Howell/WGCN) 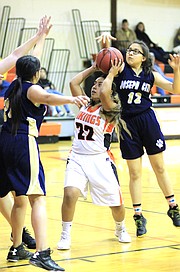 The Lady Vikings dominated from the get-go as they pulled in 17 points to the Wildcats five points in the first quarter. They continued the onslaught outscoring the Wildcats 18-5, 16-13 and 10-3 in the remaining quarters.

Sydnee Mortensen and Maegen Ford led the scoring for the Lady Vikes with 18 and 17 points respectively.

Ford went 3 for 3 on 3-point shots and Mortensen followed with 2 for 3.

Mortensen led in rebounds with six, and Amaryssa Orozco followed with five.

The Vikings boys team took control early in their game, pulling in 17 to the Wildcats 11 in the first quarter. The Vikings continued the momentum outscoring the Wildcats 17-15 in the second, 19-18 in the third and 22-20 in the fourth.