Shutdown...but at what cost? Kaibab Forest affected by budget impasse 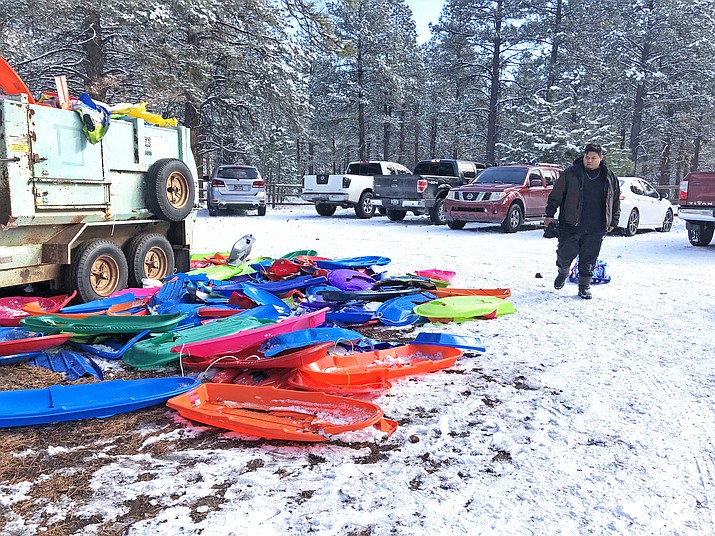 WILLIAMS, Ariz. — With several recent storms blanketing the area with snow, visitors from the Phoenix valley and beyond have been flocking to northern Arizona to enjoy the wintry weather.

Despite over 3 million acres of ponderosa pine forests, many of these snow seekers have hit the popular sledding hills in Kaibab and Coconino National Forests.

Broken sleds and accumulations of garbage are a regular concern for local residents and forest managers in Williams and Flagstaff.

Forest employees had obviously made a preemptive effort to ward off the annual deluge of refuse disposed of by careless visitors at the popular snowplay area by positioning a large trailer in the parking lot, but with the federal government shutdown no one has been around to empty it.

If anyone cared to report the issue to forest employees, they found this message:

“Hello, you’ve reached the Kaibab National Forest Supervisor’s Office. We’re not in the office at this time — we’re on furlough due to the lapse in federal government funding.”

There is currently no caretaker for the 1.5 million acre forest that covers the Kaibab Plateau north of the Grand Canyon and extends south of the town of Williams. Recreational activity continues unchecked, and all planning and new forest projects have come to a screeching halt.

An estimated 380,000 federal employees are on unpaid leave with another 420,000 employees working without pay during the shutdown, which began when Congress could not agree on a budget. The shutdown affects nine departments: Agriculture, Commerce, Justice, Homeland Security, Interior, State, Transportation, Treasury and Housing and Urban Development, as well as several agencies.

Federal administrators have not provided demographic information about the employees affected, but according to a U.S. Department of Agriculture memo issued prior to the government shutdown, 95,383 employees work for the USDA and of that 33,095 are U.S. Forest Service employees.

“The planned and orderly development and conservation of our natural resources is the first duty of the United States. It is the only form of insurance that will certainly protect us against disasters that lack of foresight has repeatedly brought down on nations since passed away.”

Of the 33,095 forest employees, 575 are exempted employees covering law enforcement duties or supporting those duties for asset protection and public safety. Thousands of other employees are on-standby without pay.

That means the majority of Kaibab National Forest employees are not receiving paychecks, and other than a few law enforcement officers and assorted administrators, there is no one responsible for the forests.

“There may be a lapse in funding for the federal government, but that will not relieve USDA of its responsibilities for safeguarding life and property through the critical services we provide,” said Secretary of Agriculture Sonny Perdue in a press release prior to the shutdown.

In the release, Perdue said USDA activities will stop or be significantly reduced and certain activities would continue that were related to law enforcement, the protection of life and property or already financed through available funding.

The Kaibab National Forest District Office is dark, with just a few vehicle tracks noticeable in the snow to the adjacent parking lot. The flagpole is bare, and several FedEx package notices adorn the front doors.

Typically the winter is a time for planning among forest personnel, the intense firefighting season is over, but preparations for the upcoming season have begun.

Fire managers depend on these months to hire seasonal firefighters for the upcoming fire season and to evaluate and secure firefighting equipment.

The winter season is also an optimal time to conduct prescribed burns when snow limits the potential for fire spread.

In mid-December, Kaibab National Forest personnel had begun fuel reduction efforts on Bill Williams Mountain with prescribed burning on the north and east slopes of the mountain. Work was also to continue on pile burns between Parks and Spring Valley.

Despite the shutdown of most forest operations, the USFS has allowed timber harvesting to continue for the 4-Forest Restoration Initiative. However, the USDA has said that no new timber sales will take place.

This decision may be as a result of a 2013 lawsuit brought by western loggers who said the federal government had no authority under timber sale contracts to force loggers to stop working.

“Loggers are still working,” said James Perkins of Perkins Timber Harvesting in Williams. “It really hasn’t hurt us over here.”

Perkins is completing a timber sale project south of Williams before his crew focuses on a state sale on Woody Mountain Road in Flagstaff.

“I got word that the shutdown cannot affect the timber sale contractors, they have to be taken care of is what I heard,” he said.

Perkins said a timber sale administrator with Kaibab National Forest has continued to check in with the loggers and is available by phone.

Despite the continuation of current timber sales, many planned projects for Kaibab National Forest have been put on hold.

According to the latest USFS Schedule of Proposed Actions for Kaibab National Forest, nearly a dozen projects were in progress prior to the government shutdown. Among these projects are the Burnt Corral Vegetation Management Project, which is designed to improve forest health on 28,000 acres in the North Kaibab Ranger District; the House Rock Wildlife Area project, which includes thinning trees and shrubs to increase forage for pronghorn, deer and bison; and the Kaibab Plateau Wireless Communications project which involves placing two 180-foot communication towers on the North Kaibab Ranger District to provide reliable telephone and emergency service for the Jacob Lake and Grand Canyon North Rim areas.

Forest managers were also working on grazing allotment restructuring for the Anita and Cameron ranches, and transitioning outfitter and guide permits to a new system.

President Donald Trump said Jan. 4 that he may keep parts of the government shut down for “months of even years” as he continues to fight with Democrats over the terms of the budget.