Out of the past: Bill Williams and the naming of a town 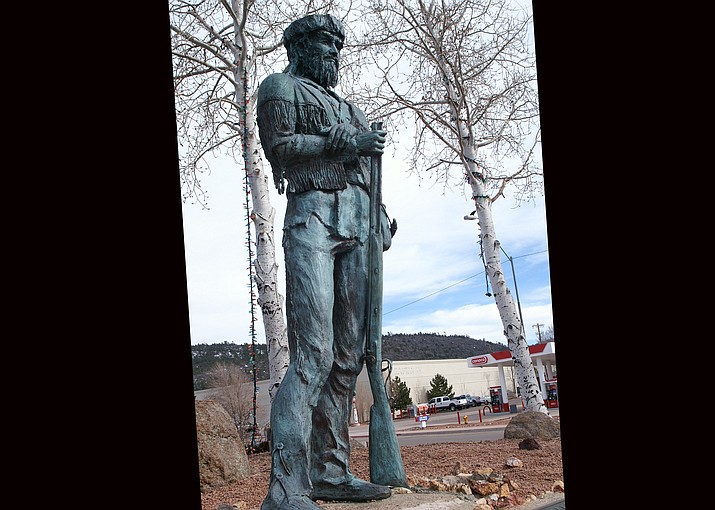 A statue of Bill Williams created by B.R. Pettit was erected in 1980 in Monument Park in Williams. Bill Williams was a trapper and preacher for whom the city of Williams is named. (Public Domain)

WILLIAMS, Ariz. — Long before Bear Grylls and Cody Lundin, mountain men were immersing themselves in the wild, encountering nature, and testing their skills in survival, exploration and endurance.

These western mountain men – fur-trappers, hunters and general wanderers - first appeared in the Rocky Mountains around 1810 and were later found in the southwest in 1830. It is difficult to say exactly when mountain men arrived in Arizona, since little in the way of written records were left behind, but they were holding rendezvous and wild parties in Taos as they traded and sold their furs almost every year after 1820.

Most mountain men who came to Arizona came on a quest for the pelts of beaver, marten, mink and other fur-bearing animals. Until 1834, the fur trade business boomed in Arizona. Some mountain men also worked as food hunters and guards at the Cooper Mines of the Gila at Santa Rita. Others wandered through to trap in the California streams or steal horses and mules for the Santa Fe and Missouri markets.

Many of these mountain men became famous characters in Arizona folklore including Kit Carson, James Pattie, Pauline Weaver, Ewing Young and Bill Williams. Also known as Old Solitaire, because he preferred to ride and hunt alone, Old Bill was one of the most interesting and enigmatic of the mountain men.

According to historian Marshall Trimble, Bill was eccentric and stubborn, keeping to himself and preferring to work alone in the often inhospitable land.

Trimble described Bill as a tall, skinny, redheaded man, standing over six-feet tall. His body was battle-scarred and gaunt; his face, weather-beaten and pockmarked. His voice was high-pitched and sounded more like a cackle. He had a peculiar way of walking — it was more a stagger and it was said he never walked in a straight line. Even among a breed where eccentricity was a way of life, Bill was considered odd.

Bill first went west as a Methodist missionary to work among the Osage Indians. He eventually married an Osage woman who died while Bill was on an expedition, and he later married a Mexican woman and a Ute woman. The Utes adopted him into their tribe.

As Bill traveled as a mountain man, he gained a reputation for his fiery sermons delivered around the campfire. They weren’t typical sermons — these were filled with spicy mountain dialect and occasional profanity.

He was a savvy trapper and was known for his knowledge of survival in the mountains. He gained a reputation as one of the best mountain men — always bringing in more beaver pelts and being better prepared than other trappers.

“His custom of traveling alone and then turning up unexpected in places after an absence gave a certain air of mystery to the man,” said historian Alpheus Favour.

Favour said Bill’s unique character was told and retold in stories, with his eccentricities often enlarged upon and his peculiarities emphasized. His experiences and stories drew the respect of younger mountain men and he became recognized as a knowledgeable pathfinder to many and even a father-figure to some.

Bill, as well as most mountain men, formed habits that were unique to these early outdoorsmen. Many could not be induced to sleep indoors or on a bed, often insisting on going outdoors and rolling up in blankets, even with snow on the ground.

“He vowed he would strangle if he stayed inside and a bed was the work of the devil,” Favour said.

These mountain men were dependent on their horses and their “possibles” bag that contained their necessities for life. Besides a knife and a rifle, it carried all things a mountain man could possibly need while traveling. Things like flint and steel for fire starting, a pipe and tobacco, beads for trading, awls for sewing and assorted other tools.

Without knowing at the time, Bill and other mountain men like him were a legitimate service to the United States as they gained extensive experience in the wildest lands of the country. They could take care of themselves and became familiar with relatively unknown lands. The learned about the Native Americans and became interpreters and guides to the Army. Many also led emigrant trains across the plains and through the mountains as they journeyed west.

Old Bill was killed along with Dr. Benjamin Kern along Del Norte, a tributary of the upper Rio Grande March 14, 1849. They were searching for a cache of surveying instruments, saddles, books and records from the ill-fated Fremont Expedition the previous winter. Both were shot by Utes while quietly smoking in camp by a party of twelve young men who entered the camp professing friendship. Old Bill was 62 years old.

Bill William's name and legacy lives as Bill Williams River, Bill Williams Mountain, and the town of Williams, Arizona. An 8-foot bronze statue of Old Bill was sculpted by B.R. Pettit and erected in 1980 at Monument Park in Williams.