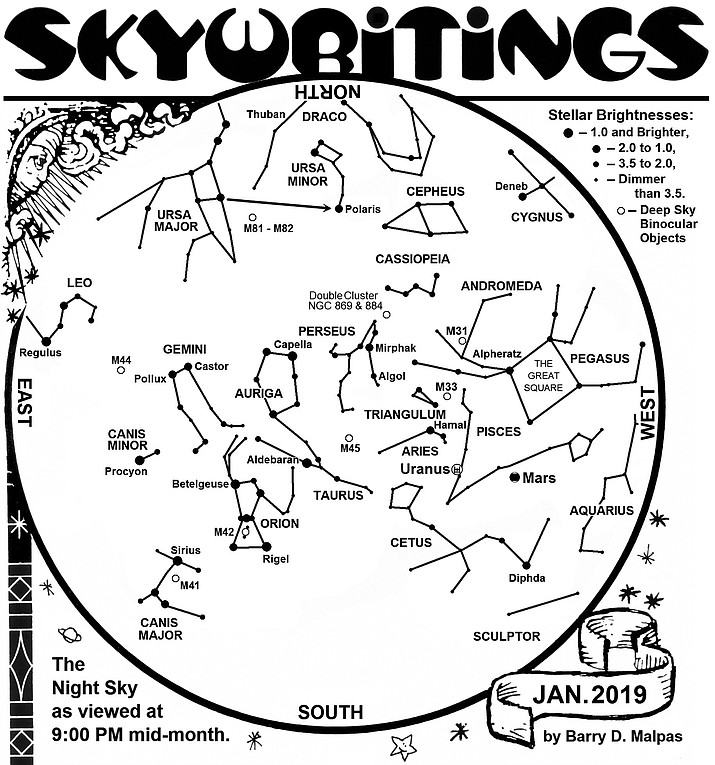 Two of the most spectacular events in astronomy are solar and lunar eclipses.

The former takes place during the day time when the new moon lies between the sun and Earth and the moon’s shadow is cast onto the Earth’s surface. The path of totality is a strip where the 150, or less, mile wide (depending on the varying distance between the moon and Earth at the time) lunar umbra shadow travels over the Earth. To observe a total solar eclipse an observer must be located within the lunar umbra’s shadow path, which is why many people travelled long distances to observe the one of August 21, 2017 as the shadow passed over the United States from Oregon through South Carolina.

A lunar eclipse, on the other hand, is quite different with respect to observing it. It takes place in the evening when the Earth is between the sun and the full moon where the moon passes into the Earth’s Umbra Shadow which appears about three lunar diameters at the lunar distance from Earth. A total lunar eclipse can be seen by most people during night time from half the Earth, with totality sometimes lasting as long as hundred minutes.

The only reason we do not observe eclipses every month is because of the five degree incline of the lunar orbit around the Earth with respect to the Earth’s orbit around the sun. So the three bodies must line up precisely so they are in “sysygy” … i.e. in a straight line, and not where the moon lays a little above or below the Earth’s shadow during full or new phases. In any given year there can be a total of seven and a minimum of four solar and lunar eclipses. This year there will be three solar and two lunar eclipses. The solar eclipses and one of the lunar eclipses will not be visible from Arizona. However, the lunar eclipse Jan. 20, will be optimally timed for observing the entire event from Arizona and the rest of the United States. The eclipse will be totality covered for 1 hour and 2 minutes, between 9:41 and 10:43 p.m.

Even though Earth blocks sunlight from directly reaching the surface of the moon during a total lunar eclipse, the moon is still visible to the naked eye. This is because Earth’s atmosphere bends the sunlight and indirectly illuminates the moon’s surface. As the sunlight passes through the Earth’s atmosphere, it gets refracted towards the moon’s surface. The colors with shorter wavelengths, blues to greens, get scattered and filtered out, while the colors with longer wavelengths like orange and red pass through the atmosphere and is refracted towards the surface of the fully eclipsed moon, thus giving it a reddish hue.

Observing the eclipse can easily be done with a standard set of binoculars. But if you want to photograph the eclipse there are several ways to do so. With minimal equipment, DSLR with 200-400mm telephoto and a tripod, you can get some interesting results. But if you have more sophisticated camera/telescope equipment and want more detailed photography information visit Fred Espenak’s website at www.mreclipse.com/LEphoto/LEphoto.html for exposures and technical answers. If you plan on doing so, I suggest the you practice an evening or two before Jan. 20 on just the moon to get some practice.