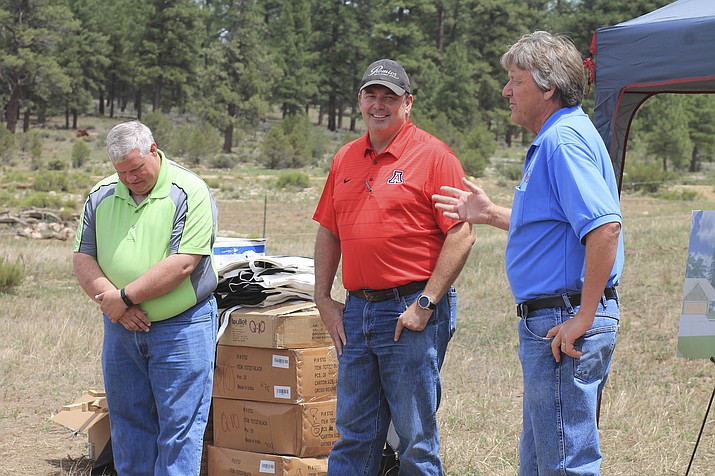 TUSAYAN, Ariz. — Progress hit a snag at the Ten X affordable housing development in Tusayan earlier this month when the town council shut down construction following a complaint from the Coconino County Flood Control District.

Mayor Craig Sanderson said the town received filing documents from the county floodplain administration and chose to voluntarily shut down the construction to work with the county directly instead of going through the court system.

The town of Tusayan has stopped construction after the Coconino County Flood Control District said it planned to file for an injuction earlier this month. (Loretta Yerian/WGCN)

“Our goal is to work with the county to address what concerns they have so we can continue building,” he said. “We want to cooperate and work with them to do what’s right for the town of Tusayan.”

At issue is exactly how much water could flow through the entire town of Tusayan, not just the Ten X development, which actually sits on higher ground than much of the town, Sanderson said. According to Sanderson, the last survey that collected data for the region was completed during a high-precipitation event in 1966, long before the town incorporated. From available data, Sanderson said the town has been building based on an anticipated flood flow of 1,240 cubic feet per second (cfs). That number was used as recently as 2009 when Camper Village was developed.

If that number is no longer acceptable, Sanderson said, the town wants to know what it’s dealing with.

In order to determine what the town is facing, Sanderson said Woodson Engineering was hired to conduct a floodplain study and gather hard, recent data for both the town and the county floodplain administration to work with. Recent data is important, according to Sanderson, because the floodplain maps developed by the Federal Emergency Management Agency (FEMA) were drawn before any significant development in the town, and they are so broad they do not give an accurate picture of where the flooding might actually occur.

Sanderson used his own home as an example.

The lack of a solid, agreed-upon flow rate is the area of highest concern for the town. According to some studies, a 100-year flood event could produce a flow of as much as 8,000 cfs. For comparison, the U.S. Geological Survey clocked the Colorado River flowing through the Grand Canyon at just over 12,000 cfs this month. Sanderson said he has also seen studies that indicate it could be between 4,000-5,000 cfs, which could wipe out the entire town. By contrast, Sanderson said, State Route 64 would be washed out at around 130 cfs.

“It’s a huge discrepancy,” he said, adding that the Tusayan sanitary district would be completely inundated at about 2,600 cfs, which would have devastating consequences for the entire town.

“The town would be shut down for months,” he said.

It begs one big question for Sanderson and the town: If 1,240 cfs isn’t good enough for Ten X, which sits on higher ground, what about the rest of the town?

“Anything over 1,240 takes out a big part of the town,” Sanderson said. “They (Coconino County Flood Control District) want us to stop at Ten X because 1,240 isn’t enough — if that’s true … we’re gonna get wiped out.”

The town council late last year gave the go-ahead for its own detailed study of the town’s floodplains, including a LiDAR study covering 50 square miles. LiDAR is a surveying method that creates a 3-D model of an area by measuring how long it takes laser light pulses to reach the ground and return to a sensor. The method is accurate to one-tenth of a foot. Sanderson said core samples of soil were taken from the region as well to determine how well the soil could retain or filter water.

Sanderson said the town plans to hand over the data to the county — it’s currently being assembled into a report and should be available in the coming weeks.

“By having actual data, we can then address the flood potential and mitigate problems,” he said.

The town will also hold a referendum, likely in May, to assume control of the town’s floodplain administration from Coconino County. Sanderson said Coconino County is large and has many priorities, but the town has time and resources to handle its own floodplain problems.

“We know that we have flooding issues, but the county doesn’t have it on their agenda,” Sanderson said. “As a town, we have the resources, we can hire the expertise (to deal with floodplain issues).”

The Coconino County Flood Control District could not be reached at press time.