High and dry? How to handle those pesky frozen pipes 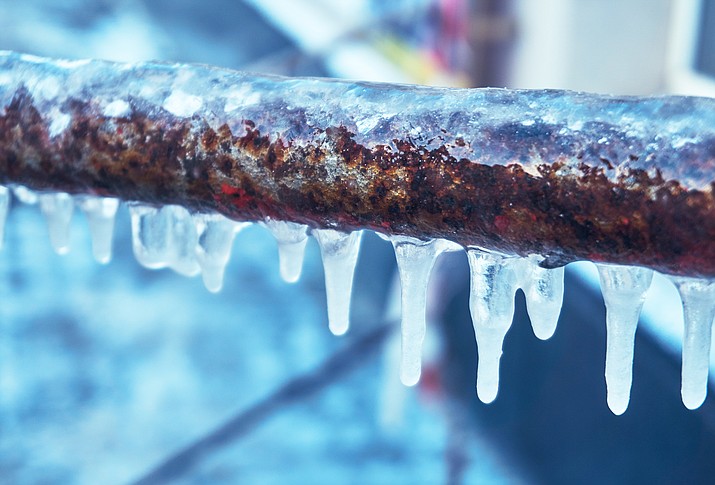 WILLIAMS, Ariz. — Williams’ erratic winter weather can wreak havoc on homeowners and renters. Frozen pipes are not only an inconvenience, but can very costly. Unexpected costs associated with frozen pipes can be easily avoided by taking a few simple precautions, preferable in the fall before cold temperatures arrive.

“The best thing is to prepare in the fall and go into the winter ready to go,” he said.

Ross said he has been assisting homeowner’s in the Parks and Williams area with frozen pipes that were a result of last week’s extreme cold weather. He said the majority of frozen pipes were found in older mobile homes and older homes in town.

“Many have galvanized piping that for some reason freezes up quicker,” he said. “And the mobile homes have more pipes exposed under the homes.”

“There is a type that conforms to the size of the pipe,” he said.

He also recommends covering any vents that allow airflow under the home.

“I tell my customers to cut cardboard and put it up there to block it,” he said. “It’s like a wind tunnel under there.”

Other simple methods recommended include keeping garage doors closed if water supply lines go through the garage, and opening kitchen and bathroom cabinets to allow warm air to circulate through the home.

“I recommend purchasing a ceramic heater with a thermostat place in the pump house,” he said.

Ross said many people use heat lamps in their pump house, which he discourages.

“People often forget about their lamps and they will burn out,” he said. “I used to have two lamps, one with a photo cell in it that would turn on if the other was off. But it is too easy to forget to check them.”

Ross said if someone finds their pipes are already frozen, the best option is to call a professional.

“You have to be really careful when thawing pipes,” he said.

“Pipes break and can cause flooding,” he said. “And if there is anything electrical nearby, that can be a problem.”

Ross said some people use hairdryers to thaw a pipe, but it can take a while and people need to be prepared for water to spray from an undetected break.

As a professional, Ross said he uses a heat gun to thaw pipes, but he doesn’t recommend inexperienced people try that method.

“I don’t recommend it because of the combustibles that are found near pipes, which include the insulation and wood in the floor joists,” he said. “You can easily start a fire.”

For vacation homes or for people gone for extended periods of time, Ross recommends turning the water off, unplugging the pump and setting the water heater to a vacation setting before leaving.