Grand Canyon rings in 2019 at Phantom Ranch with scorpion drop

GRAND CANYON, Ariz. — There’s no perfect time to see the Grand Canyon — it changes, some days it’s 100 degrees and blistering hot with heat waves bouncing from one ridge to the other and some days it’s 8 degrees and there’s snow flying. Which just happened to be the case this New Year’s Eve.

I had planned to hike into the Canyon to bring in 2019 months before, my reservation at Bright Angel Campground had been made and my hiking partner and I had been anticipating and planning the hike for weeks. While the weather wasn’t perfect, it was an opportunity that we decided couldn’t be missed — government shutdown or not. 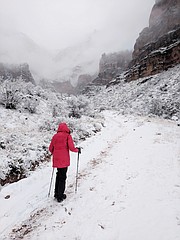 A hiker prepares to ascend the Bright Angel Trail at Indian Garden on her way out of the Grand Canyon Dec. 31. (Photos/Brandon McKenney)

On Dec. 31, it was white. There was snow everywhere. Slowly drifting downwards, accumulating at my feet, sitting on the top of my truck, along the sidewalks and balancing on tree branches.

The forecast was calling for snow all day, with a slight chance the winter storm could clear up on New Year’s Day. I took that into consideration as I set out for the Bright Angel Trailhead. The Canyon was quieter than normal. I wasn't sure if it was because of the heavy snowstorm or because of the government shutdown that was now two weeks in.

For the last decade or more Grand Canyon employees — park service personnel and concessionaire employees have timed their New Year’s celebration to match the one in New York City — 10 p.m. MST.

Legend has it that a park service superintendent gave NPS employees permission to host a New Year’s celebration at Phantom Ranch Ranger Station years ago, and the tradition has continued today. 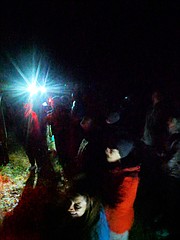 A crowd gathers at the Ranger Station at Phantom Ranch and Bright Angel Campground at the bottom of the Grand Canyon for the annual scorpion drop on New Year’s Eve. (Photo/Brandon McKenney)

For an entire year, a stuffed scorpion measuring about a foot in length sat on a shelf in the ranger station. It was left there to watch over the station happenings until New Year’s Eve, when it was taken outside the station, attached to the flag pole, along with a two and a half pound weight and raised to the top.

At precisely 10 p.m., those camping, lodging or employed in the Canyon gathered at the flag pole and counted down the dropping of the scorpion. The scorpion had a glow stick secured to it — the only other lights are the dim glow of headlamps, flashlights and glow sticks.

Everyone gathered for the drop, giggling in anticipation, and there was a hush as the darkness and depth of the Canyon hung over the little crowd. The anticipation built until the park ranger greeted everyone and began the countdown — 10, nine, eight, seven, six, five, four, three, two, one!

The scorpion slid down the flagpole and the crowd erupted in shouts of ‘Happy New Year!’ and hurrays. As quickly as everyone gathered, they dispersed, going back to their cozy cabin at the ranch or their tents at the campground.

The next morning, Jan. 1, the snow had cleared — there was still traces along the high ridges and on the trails, but the storm was over and the warmth of the Arizona sunshine filled the Canyon.

The hike out was crisp and clear. Views of snow capped ridges lined the horizon as far as the eye could see. Vast expanses and buttes and valleys where the Canyon dips and turns were around every switchback of the South Kaibab Trail. Hikers were giddy and eager to be on their way. There was magic in the air — it was a new day and a new year. I couldn’t help but wonder what would lie ahead in 2019 after starting the year off surrounded by epic scenery, in the depths of the crown jewel of national parks.