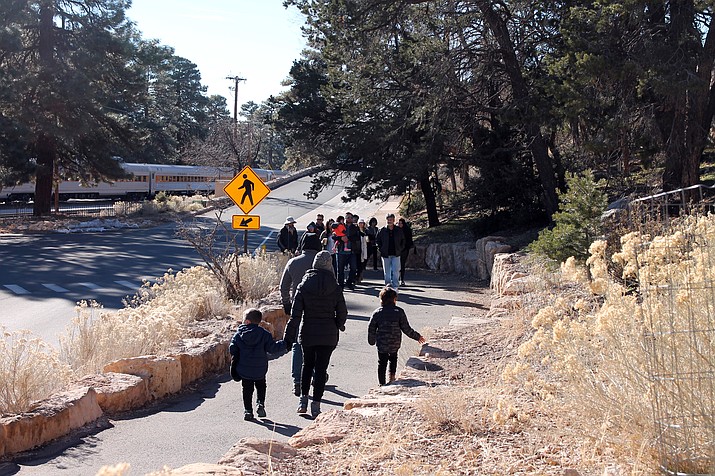 GRAND CANYON, Ariz. — As the government shutdown continues to keep most NPS employees away from Grand Canyon National Park, more and more visitors are arriving at the rim with little direction or sense of where to go.

With no end in sight, employees of the Grand Canyon Conservancy (GCC) have stepped up to try and fill the large shoes left by the rangers’ absence.

Because Grand Canyon Conservancy is a non-profit partner of the park, all of their retail stores and offices within Grand Canyon remain open — and since the Visitor Center is closed, GCC’s bookstore and retail shops have become a clearinghouse for onsite information.

NPS entrance staff are tasked with being the first contact for visitors, handing out maps, answering questions and directing them where they want to go. Without that contact, many visitors arrive at the rim confused about where they should go or what shuttle route to take. GCC spokeswoman Alysa Ojeda said employees are doing their best to fill in the gaps, handing out maps and helping direct visitors.

Ojeda said store employees are also doing their best to keep the park’s youngest visitors engaged, handing out junior ranger booklets and coming up with supplemental activities to go along with them so junior rangers can still be sworn in at the park.

Outside of Arizona, non-profit groups and volunteers, and even some guests, are doing their part to help the parks run as smoothly as possible.

The park service has reached deals with more than 60 partner groups, concessionaires and states to handle trash removal, restroom cleanup and other basic tasks at more than 40 parks — and, in a few cases, to keep park staffers on the job, spokesman Jeremy Barnum said Jan. 4.

The state of New York was footing the bill to operate the Statue of Liberty-Ellis Island National Monument, while a private company donated portable toilets at several locations on the National Mall in Washington, D.C. The National Park Foundation took charge of repairing and operating the National Christmas Tree.

Another nonprofit donated more than $50,000 to keep 15 rangers temporarily on the job at Great Smoky Mountains National Park in Tennessee and North Carolina.

“We’ve been dubbed the ‘Toilet Paper Angels,’” he said.

Yosemite National Park in California reported Jan. 4 that a man died after falling into a river on Christmas Day, and a spokesman said a statement was not issued more promptly and the investigation took longer than usual because of the shutdown.

People living near Yosemite have organized work crews, while businesses in neighboring towns are offering incentives for visitors to remove their rubbish.

The Rush Creek Lodge in Groveland gave a complimentary coffee, cocktail or dessert to all bringing a full trash bag from the park. Spokeswoman Teri Marshall said the lodge was trying to devise a slogan for the promotion.

“’Turning garbage into goodies’ is where I think I might be hanging our hat,” Marshall said.