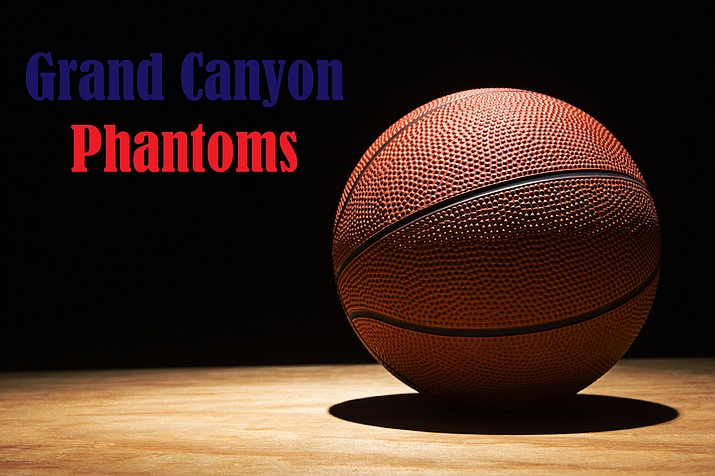 GRAND CANYON, Ariz. — The Grand Canyon Phantoms took two tough losses before the winter break, bringing their record to 4-8 for the first half of the season.

In the game against Ash Fork Dec. 20, the Phantoms came out strong, keeping the score even and going into halftime down by one point. They spotted the Spartans seven points in the third quarter before pulling even again in the fourth, but were unable to overcome the deficit and lost the game by just 8 points, 60-52.

The Phantoms traveled to Rock Point the next day to face the Cougars on their home turf. Although the Phantoms got off to a slow start, ending the first period down by 10 points, they pushed back in the second quarter, heading into the locker room down by 11 at the half. The Cougars edged the Phantoms in a strong third quarter, but the Phantoms came back to even the scoring in the final period. It wasn’t enough to cut into the first quarter’s deficit, however, and the Phantoms lost 66-49.

Reid took the team on his shoulders for the entirety of the game, running over the Cougars for 32 points, including going 6 of 9 from beyond the arc, and grabbing six rebounds. Longhoma, Keebahe and Cordell Bob contributed a total of 17 points, although Longhoma and Keebahe crashed the boards for a combined 24 rebounds, more than half of them offensive.

The Lady Phantoms kept the scoring consistent throughout the game, overcoming recent third-quarter scoring slumps in favor of a sustained offense. Sophomore Savannah Longhoma led all scorers with 17 points and also contributed five offensive rebounds, three assists and four steals. Maria Dugi scored 11 and Cayli Miles nine points, with six other Lady Phantoms on the scoreboard in single digits. Alana Keebahe and Kara Austin provided a strong presence in the paint, pulling in 12 and 8 rebounds apiece.

The Lady Phantoms suffered their fourth loss of the season, losing a tough game to the Rock Point Lady Cougars on the road, 64-55.

Rock Point surged early, outscoring the Lady Phantoms 23-13 in the first period and going on an extended 18-4 run in the second. The Lady Phantoms came out of the locker room ready the play in the third, trading baskets with the Lady Cougars before running away 20-5 in the final frame. The team was unable to recover from the damage done in the first half, though, and the Lady Phantoms were defeated by 11 points.

Miles led the scoring charge for Grand Canyon, producing 22 points and going 7 of 16 from the floor. She also contributed five rebounds, three assists and four steals. Austin and Keebahe pounded the boards for nine rebounds each with Keebahe also posting up nine points. Longhoma drained 14 points for the Lady Phantoms, along with grabbing nine rebounds of her own and going 100 percent from the free throw line.