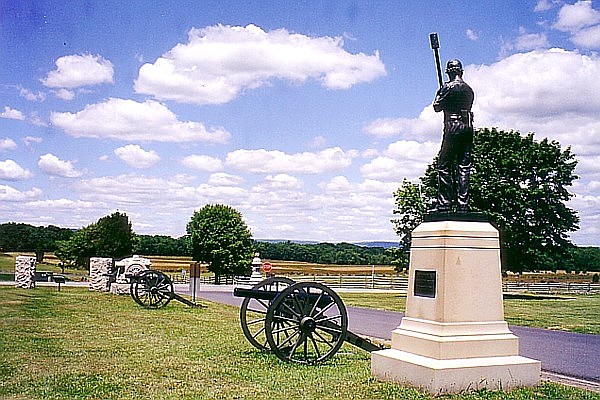 GETTYSBURG, Penn. — Thanks to partner support and federal funding from the Helium Act, a total of $188,129 is available to do repairs and preservation maintenance for more than 350 civil war monuments on the Gettysburg battlefield.

National Park Service preservation specialists will use the funds to continue to work on more than 350 of Gettysburg’s 1,300 monuments, steam cleaning stone features and pedestals, re-pointing and preserving masonry, power-washing and waxing all bronze elements, and repairing and replacing missing or broken bronze features, as necessary.

Beginning in 1863 veterans and survivors of the battle of Gettysburg preserved the battle grounds and created the commemorative features and monuments that still define the park today. The 1895 law establishing Gettysburg National Military Park authorized the federal government to preserve the “important topographic features of the battlefield” and to preserve and mark the battle positions.

JACKSONVILLE, Flo. — Timucuan Ecological and Historic Preserve accepted the deed on a Spanish-American War fortification from the North Florida Land Trust (NFLT) in a ceremony December 14, 2018.

The Spanish-American War fortification sits atop St. Johns Bluff. It was built in 1898 as part of a U.S. coastal defense strategy in preparation for a possible naval assault on American ports. Although no such assault occurred, the gun emplacement stands as a monument to the strategic importance of the region. This history stretches from Fort Caroline’s infamy as the first European conflict in the U.S., to the establishment of a British fort on the bluff, through the Civil War and the Battle of St. Johns Bluff, into the 20th century. This Spanish-American War fortification is the only one remaining.

This study, led by a U.S. Geological Survey scientist, is evaluating whether it is possible to reduce the prevalence rate of CWD in the park’s elk herd by reducing herd density. Over the last two years, the park has culled 286 elk from the herd. The recently installed collars will be used to help monitor elk movements, mortality, and habitat use as part of this CWD study. This brings the total of elk currently collared in the park to 66.