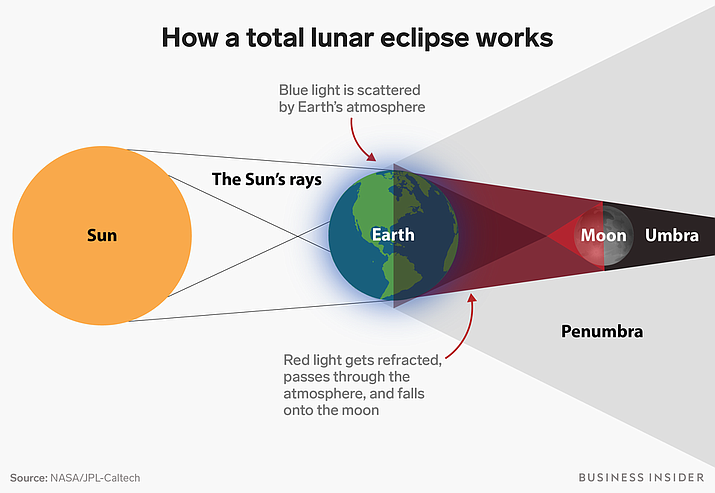 WILLIAMS, Ariz. — While last year’s solar eclipse may have stolen the show in terms of exciting astronomical events, January’s super wolf blood moon promises to be spectacular in its own right.

As a bonus, star gazers will be treated to a brighter view, as stars will appear clearer and brighter in the absence of solar light noise.

Unlike total solar eclipses, lunar eclipses happen at least a couple times a year, with a total eclipse occurring every two years or so. According to NASA, the next total lunar eclipse happens on May 26, 2021.

The last time sky watchers were treated to a supermoon eclipse was in September 2015.

The Jan. 20 super wolf blood moon is actually a culmination of three separate lunar events converging at the same time. When the moon moves into the Earth’s umbra, or shadow cast by the sun, it takes on a coppery red color, earning the nickname “blood moon.”

A supermoon is caused by the moon’s orbit around the Earth – it’s not completely circular, resulting in the moon being physically closer to Earth at certain points in its monthly revolution. During a supermoon, the moon appears larger in the sky.

Lastly, a wolf moon simply refers to the first full moon in January. According to the Old Farmer’s Almanac, the Algonquin tribes in the eastern U.S. named the moons each month to help them keep track of the seasons and lunar months, and many colonial Americans adopted these names. The Almanac suggests the Native Americans referred to January’s full moon as the wolf moon because they heard wolves howling in hunger during one of the coldest months of the year. Some tribes, it notes, also refer to it as the Old Moon.

Blue moon eclipse around the corner

January has a full schedule of lunar events, including a super blue blood moon on Jan. 31. Conditions will be the same as for the Jan. 20 event, except instead of a wolf moon, it will be a blue moon, or the second full moon in one calendar month.

Statistically, a blue moon total eclipse is much more rare. Worldwide, the last one happened in 1982, although that one was not visible in North America. The last one to be visible from U.S. skies was in 1866.