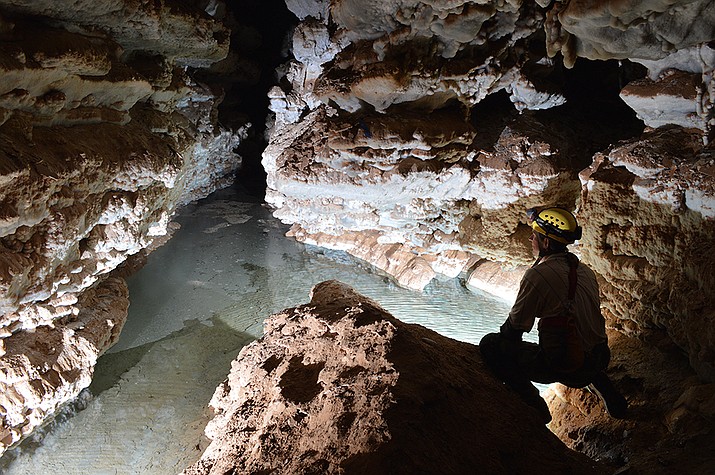 Wind Cave’s 150 miles includes a series of lakes over 500 feet beneath the surface. (Photo/NPS)

Modern day exploration of Wind Cave began in the 1950s with groups from the South Dakota School of Mines, the Colorado Grotto and the National Speleological Society. Since then, hundreds of individuals have crawled, climbed and squeezed through passages while exploring Wind Cave, making it the sixth-longest cave in the world.

“Cave exploration is a critical part of managing the cave because it’s hard to protect something you don’t know you have,” said Superintendent Vidal Dávila. “We’d like to thank all the individuals who, over the years, donated their time exploring this massive cave system.”

Most of the current cave exploration is done by volunteers from either the local Paha Sapa Grotto or the Colorado Grotto in Denver.

On average, two miles are surveyed annually, and it is estimated over 3,000 leads, or unexplored openings, remain to be checked. Studies of airflow through the entrances reveal that potentially only 10 percent of the cave has been found. This echoes the sentiments of the cave’s first systematic explorer, 17-year-old Alvin McDonald, who wrote in 1890, “Have given up the idea of finding the end of Wind Cave.”

Exploration can lead to discoveries within discoveries, such as those now taking place at the bottom of a known cave. Over 500 feet beneath the surface lies a series of cave lakes. Part of the Madison Aquifer, the first lake was discovered by Herb Conn and David Schnute in 1968. Scientists from the University of Akron are studying the microbial life found in the lakes. Despite living in an environment with no sunlight or photosynthesis, the lakes contain a very diverse bacterial community of over 4,000 species, a large portion of which have never been identified and are unique only to Wind Cave. Perhaps someday the bacteria in the lakes could be used to produce compounds such as antibiotics that might be used as medicine.