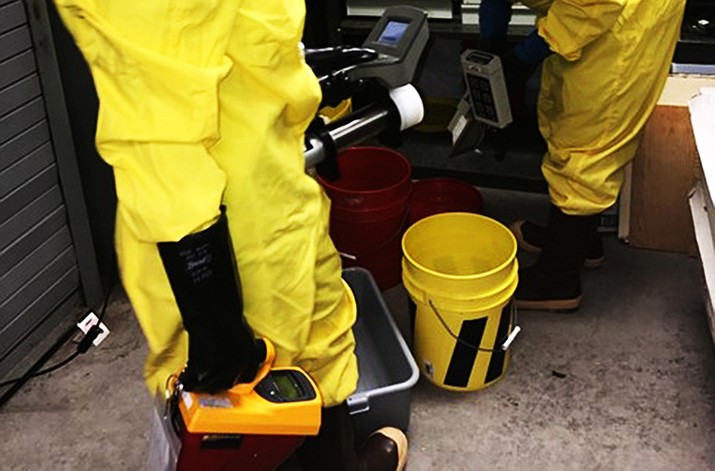 GRAND CANYON, Ariz. — The National Park Service is conducting an investigation into whether employees and visitors at Grand Canyon National Park were exposed to unsafe levels of radiation after an employee Elston Stephenson, the park’s safety, health and wellness manager, sent an email to park employees Feb. 4 and another to the Department of the Interior Feb. 11 stating three, 5-gallon buckets of uranium ore had been housed in the park’s Museum Collections building for about 18 years and that anyone who had visited or worked in the building may have been exposed to unsafe levels of radiation.

Grand Canyon National Park spokeswoman Emily Davis confirmed that the material was removed from the building and that the park was conducting an investigation.

“We are working with NPS subject matter experts from our regional office and Washington, along with other state agencies,” she said.

In emails obtained by Grand Canyon News, Stephenson said the buckets were discovered in March 2018 and had been moved to the Museum Collections building from park headquarters. He said he was made aware of their existence months later while performing a safety audit and immediately contacted the NPS regional office in Colorado.

Stephenson informed employees via email that a team of NPS technicians arrived at the park June 14, and Intermountain Region Occupational Safety and Health Manager Bill Bouley conducted an initial survey of the building. Bouley reported his findings in a memo to the Interior Department. Outside the building, Bouley reported a reading of 2.02 mR/hour – the maximum safe exposure recommended by the Nuclear Regulatory Commission (NRC) is 2 mR/hour. Bouley’s readings went up to 13.9 mR/hour near storage cabinets in the area. Contact with the ore itself resulted in 800 mR/hour and contact with the sealed buckets yielded 280 to 320 mR/hr.

At a distance of five feet from the buckets, Bouley’s readings indicated no radiation above background levels.

Stephenson said the radioactive ore was removed by NPS officials from the Museum Collections building and taken to Orphan Mine via this pickup June 18, 2018. (Photo courtesy of Elston Stephenson)

After the initial survey and a follow-up survey June 15, the buckets were removed from the premises.

In a recent article published by the Arizona Republic, Stephenson, who said he was present during the removal, said the technicians did not have protective clothing, but instead purchased gardening and dishwashing gloves and removed the buckets from the building with a broken mop handle. He said although they took readings with a device that measures radiation output, they concealed their readings from him before transporting the ore in the back of a truck and dumping it in the now-defunct Orphan Mine below the South Rim.

It was prior exposure that concerned Stephenson, however, who said his email was the result of park management refusing for months to inform employees or the public of the situation. The Museum Collection often hosts school field trip tours, and the taxidermy exhibit, which is sometimes visited by these tours, was located next to the room where the radioactive material was stored.

Of most concern, Stephenson said in the emails, was that one of the buckets was so full it couldn’t be closed.

“The big concern is ... no barrier existed in this instance, and there can be no accounting for dust or blown/airborne material,” he wrote.

Stephenson noted in his email that an oscillating fan was placed in the area, which had the potential to blow particles from the unsealed bucket.

According to the Centers for Disease Control and Prevention (CDC), tactile exposure to uranium is not the main cause of health consequences because the skin is able to block this form of radiation. However, when ingested, such as in contaminated water, or its dust particles are inhaled, uranium can cause cancers of the lungs, liver and bone, among others.

According to the park’s museum catalog records, the samples in questions were collected between 1944 and 1965, with most of the material coming from the South Rim’s Orphan Mine. They have been in the park’s research collection since then and were previously stored in the basement of park headquarters.

Stephenson said in his emails that while visitors and employees were exposed to radiation under OSHA’s definition, it didn’t necessarily mean everyone who was in the building would experience symptoms or serious health concerns. 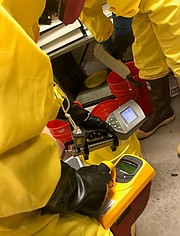 NPS employee Elston Stephenson stated that while visitors and employees were exposed to radiation under OSHA’s definition, it didn’t necessarily mean everyone who was in the building would experience symptoms or serious health concerns. (Photo/Elston Stephenson)

In a follow-up email sent to employees Feb. 17, Stephenson said a nuclear engineer and chemist from the Arizona Department of Health and Safety (ADHS) Bureau of Radiation Control performed additional surveys in the Museum Collections building Feb. 5.

“They took readings from five different devices, took swab samples of the areas of concern for readings of any residue and took possession of the buckets that the uranium was stored in,” he wrote. “All of the concerns that they investigated turned up negative.”

Currently, NPS and the Department of the Interior (DOI) are coordinating with federal and state agencies to investigate and address concerns raised by the recently-released reports. An investigative team of radiation, industrial hygienists, and occupational health experts are reviewing available material and will be in the park in the coming weeks. An NPS press release said the park expects results of this review within 90 days.

The NPS and DOI investigation will examine the level of exposure and potential risk to park visitors and employees when the rock samples were present in the Museum Collection building. It will include a dose reconstruction that will allow experts to determine exposure levels present when the samples were stored in the Museum Collection building, document the park's storage practices, and review employee work and handling practices. The investigation will also review past assessment reports, provide recommendations regarding how samples are managed in the future, and address the potential need for long-term health monitoring, if applicable.

"Visitor and employee safety is our top priority," said Grand Canyon National Park Acting Superintendent Lisa Carrico. "We take this matter very seriously and the National Park Service and Department of the Interior have moved to assemble the appropriate interagency health and safety specialists to determine possible safety concerns, and clarify the relevant facts regarding this issue."

Grand Canyon National Park has added a Frequently Asked Questions section to the Museum Collection page for anyone with concerns. The information can be found at https://www.nps.gov/grca/learn/historyculture/muscol.htm. A recorded hotline, which will be updated as more information becomes available, has also been established at (928) 638-7688. Anyone with specific questions is encouraged to email grca_incident_team@nps.gov.

The building remains open to the public after current readings showed nothing higher than an acceptable level of background radiation. Stephenson did not immediately respond to emails with requests for comments.

“I can’t comment on personnel matters, but he (Stephenson) remains employed by the National Park Service," Davis said.