Permanent ban on uranium mining near Grand Canyon in the works 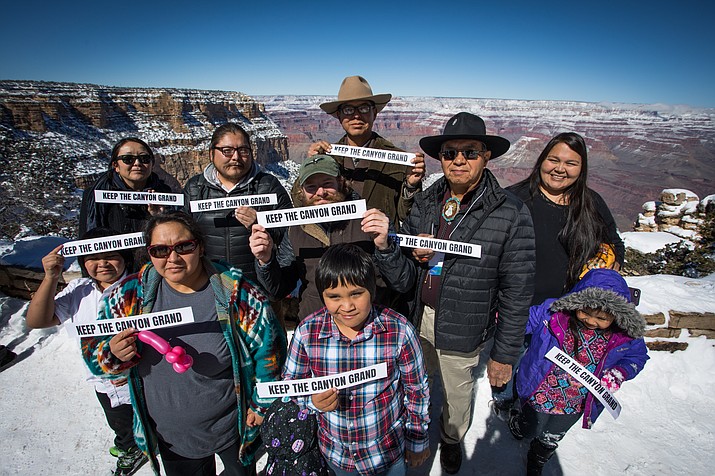 If enacted by Congress and signed into law, the act would make permanent the 20-year mineral withdrawal put in place by former Interior Secretary Ken Salazar.

“Today we embark on an effort to continue our reverence and generations protection for the Grand Canyon,” Grijalva said. “It’s what the Grand Canyon needs and deserves.”

The bill, which will be formally introduced Feb. 26 — Grand Canyon National Park’s 100th anniversary — will be co-sponsored by Rep. Tom O’Halleran, who represents the district surrounding Grand Canyon.

O’Halleran said it was the responsibility of lawmakers to look out for the people and families who live in the area affected by uranium mining, adding that, in addition to residents, the millions of visitors who come to see the heritage site expect stewardship of its beauty.

And although the families come first, O’Halleran said, other residents depend on the canyon as well.

“The wildlife that’s here across these lands need our help,” he said. “We need to preserve these surrounding lands from a mining legacy that has devastated and killed many people.”

To see the effects that generations of uranium mining have had on the area’s inhabitants – mostly Native Americans — one only needs to look a couple hundred miles to the northeast at the Navajo Reservation. On the Navajo and Hopi people, uranium mining took perhaps its harshest toll, with more than 500 defunct mines still awaiting cleanup.

It’s a future conservationists, tribes and some lawmakers hope to avoid for about 1.7 million acres surrounding Grand Canyon. Havasupai tribal council member Carletta Tilousi said she has been working on eradicating uranium mining from the region since she was a teenager

“Back then, the only voice against uranium mining was the Havasupai,” she said. “Now you all are here, joining us, so that many voices together can stop uranium mining in this region.”

On behalf of the Havasupai Tribe, Tilousi has been one of the most adamant voices in recent years, advocating for a permanent ban on uranium mining in the Grand Canyon watershed. Isolated at the bottom of Havasu Canyon, the tribe relies solely on the areas seeps and springs for all of its drinking water, and the possibility that mines could leave lasting contamination in the ancient underground water supply is unacceptable.

It is a stance that is echoed among other tribes in the area who also rely on the Colorado River for their lives and livelihoods. Hopi vice chairman Clark Tenakhongva expressed the tribe’s full support of the ban, and explained how the dangers of uranium mining had personally affected himself and his family through the years.

“Two of our villages, Upper and Lower Moenkopi, are now threatened by uranium contamination … in the groundwater,” he said. “Our people suffer and ongoing legacy of death by cancer and health problems from radioactive contamination.”

Tenakhongva said that based on the tribe’s experiences in Upper and Lower Moenkopi, he knows the contamination will spread.

“It does not stay in one place,” he said.

Tenakhongva said he has lost four family members to complications from radiation poisoning as a result of the testing in Nevada during the mid-20th century, including his mother, mother-in-law and two brothers.

“I know what cancer can do to families,” he said.

Cancers resulting from radiation poisoning weren’t limited to the Hopi Tribe. Coconino County Supervisor Lena Fowler recalled her days growing up in Tuba City, where the Rare Metals uranium mine was once located.

Fowler recalled a conversation between herself and a few friends in which one, who worked on the school board, said the school was concerned about the need for increased special needs funding.

“She said ‘We don’t know what’s wrong with our children,’” Fowler recalled.

Fowler said uranium mining was eventually indicated, with tailings from the mine contaminating many areas of town. The residents, Fowler said, didn’t know anything was amiss.

“You don’t know when it’s affecting you,” she said. “We were swimming in these uranium (contaminated) pools, we were drinking the water, much like here, we were just told there were mines here.”

Fowler said a preschool building was built on top of uranium tailings, and some homes in the area were built using the tailings and the animals became contaminated after drinking the water and eating forage around the radioactive material.

“In 1980, we had to ask all the families that lived near Rare Metals to sell their sheep, all their animals, and one mile had to be shaved,” she said. “All the homes had to be taken down and people had to move.”

Fowler said the Board of Supervisors was in full support of the ban, not only for the residents she serves in her district, but for all citizen and visitors who come to the area.

“Protecting the natural integrity of the Grand Canyon region is culturally and ecologically important,” she said. “This place is too precious to risk and too precious to mine.”

Evans said since 2010, the Flagstaff City Council has passed several resolutions opposing uranium mining, the transportation of uranium ore and any related activities that further radioactive pollution in the region.

Like others, Evans said she was affected by radiation. As a downwinder (those affected by the nuclear testing in Nevada), Evans’ mother passed away from breast cancer as a direct result of the contamination. Evans herself has also had breast cancer twice.

A measure to ban uranium mining in the Grand Canyon watershed was introduced once before, in 2008, and was subsequently defeated.

Grijalva said that since 2008, when the bill was first introduced, the conservation ethic has become stronger.

“We’re not dealing with a park, we’re dealing with the Grand Canyon,” he said. “Seventy percent of voters polled in Arizona support making the mining ban permanent.”

Grijalva said a lot has been learned since the previous effort, when he described supporters as being too defensive in trying to answer questions he feels are misinformed. This time, he plans to be more proactive in educating other lawmakers and making a case for the ban.

“Public opinion is with us and we’re going to make better use of it,” he said.

Grijalva said he is more confident now than ever before in the bill’s chances at passing the house, and said he hopes either Arizona Sens. Kyrsten Sinema or Martha McSally will agree to sponsor it in the Senate.