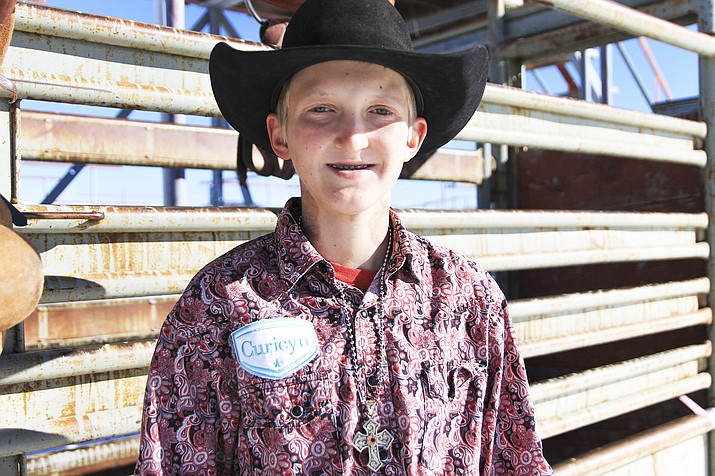 WILLIAMS, Ariz. — Every kid has a dream. Riding bulls and competing in rodeos is Wyatt Kraft’s dream.

Kraft, who lives on the Babbitt Ranch, north of Williams, said his inspiration comes from the timeless movie, ‘8 Seconds’ which documents the true story of Lane Frost, a world champion bull rider who died in the arena at the 1989 Cheyenne Frontier Days Rodeo.

“I love it. (‘8 Seconds’) is fun and interesting to watch. Then when you get on one (a bull) it gives you the excitement and adrenaline rush,” Wyatt said.

Wyatt, 14, isn’t just in the sport to compete, he’s in it to win. Which is exactly what he did last year, winning the Southwest Regional Bull Riding League in New River, Arizona which qualified him to compete at the 2018 Jr. National Finals Rodeo in Las Vegas.

In December, Wyatt competed in the 12 to 13-year-old bull riding event, riding three different bulls over the course of three days.

Wyatt’s parents, Will and Teah Vest, live and work at the Espee Camp, one of several ranch camps on Babbitt Ranches. He, his parents and younger brother and sister have worked and lived on the ranch since 2014.

Wyatt first started riding in rodeos when he was little, riding sheep and then steers before moving on to mini-bulls. Under the guidance of his grandfather and stepfather, Wyatt has learned the art of bull riding.

“It’s always been there. His grandparents and his dad had a rodeo company so he was born in rodeo,” said his mother, Teah. “Any kid who wants to ride rough stock, they always start on sheep.”

Teah said Wyatt has always enjoyed the challenge of the sport.

“The more he would ride, the more he enjoyed and liked it, and the older he got he just moved up in the age groups. They go from sheep to calves to steers, to mini bulls and his age group now, they’re a little bit bigger mini bulls, smaller regular size bulls,” she said.

Despite this, Wyatt’s parents support his dream. In addition to the movie ‘8 Seconds’ Wyatt said his stepfather is another source of inspiration.

“My first big bull was with my step dad, Will, in New River. I didn’t last but two jumps, but I got better,” Wyatt said. “My stepdad Will is a big inspiration. He helps me with a lot of my stuff, he gives me little talks before I get on. He used to ride bulls too.”

Wyatt has been riding bulls for three years now.

The first time Wyatt lowered himself onto the back of a big bull, he lasted only a few seconds.

“I was excited, I was a little nervous because it was a big bull — the size of the bucking shoot,” he said. “He was a big bull and they were telling me stories, I was getting on just to practice and he went on one long jump out.”

To develop his skills, Wyatt rides bulls during the summer with his grandfather and he attended the Gary Leffew Bullriding School in New River, Arizona.

“They teach you up, down movements and how to get your form,” Wyatt said about the school. “You do workouts for form and go inside and watch a couple videos and then you go outside and ride.”

Being limber and physically strong is important, he said.

“Mainly, before you get on you want to stretch your groins, because if you catch a knot on your rope you’ll pull a groin or tear it and it’ll hurt,” Wyatt said.

In 2016 and 2017, Wyatt competed in and won the steer riding event at the annual Cowpunchers Reunion Rodeo in Williams.

Last year he rode in rodeos in New River, Casa Grande and Prescott, among others.

“Those bulls, some of them are pretty weak but other are pretty good,” Wyatt said.

Of the three bulls Wyatt rode in Las Vegas he said his second bull was the most challenging.

“The second bull was pretty hard. I saw a video from the year before and he went out there in one or two jumps and spun to the left. So I anticipated on him turning back and he was more ducking and diving. You really had to be on your game. If you would have sat down on that bull he would have really got you off,” he said. “The first bull wasn’t much of a challenge, he was more of a puppy. My final bull was a nice hop, kick bull.”

Prior to December, Wyatt had never been to the NFR. Considered to be the biggest gathering of professional cowboys and cowgirls in the world, the NFR is held once a year with top competitors earning more than $300,000. The Jr. NFR is a way for up and coming competitors to get a foot in the door.

One of the biggest challenges of making it to Vegas is financially supporting his goal. In addition to entry fees, some association membership fees can run upward of $85 - $150.

When he’s not rodeoing, Wyatt helps his family on the ranch and works on his school work — he is homeschooled.

He also rode in Jr. Bronc Riding competitions last year and plans to make that a goal for this year.