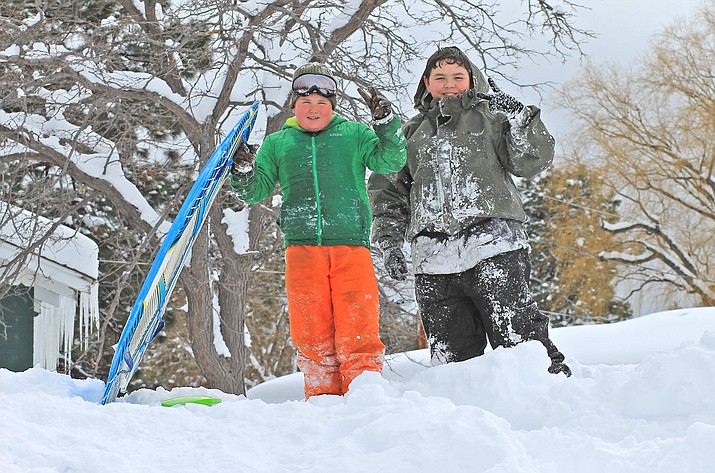 Spunky Pitts and Ethan Michelena take advantage of the massive snow that fell in Williams Feb. 21. The storm caused numerous road closures and many businesses and schools shuttered early in anticipation of the snow. (Wendy Howell/WGCN)

WILLIAMS, Ariz. — A winter storm blanketed northern Arizona with record-breaking snowfall resulting in closures to schools, businesses and highways across the state.

The February storm rolled through western Arizona early Thursday, dumping 14 inches of snow in Kingman, and then headed toward Williams, Flagstaff, and the Grand Canyon before finishing its route in New Mexico and Texas.

The National Weather Service reported 24 inches of snow fell in Williams Feb. 21, followed by an additional 12 inches on Feb. 22. The 36-inch two day total snowfall tied for third place for all-time 2-day snowfalls. The record was Jan. 3, 1990 when 37 inches was recorded.

Snow piles up on side streets in Williams. (Wendy Howell/WGCN)

Northern Arizona residents were encouraged to stay off the roads, with many Williams residents stranded on unplowed rural private and county roads until Saturday morning.

A storm rolled through Williams dropping up to 36 inches Feb. 21-22. (Wendy Howell/WGCN)

As residents prepared, the National Weather Service advised “difficult to impossible travel conditions are expected” and delaying travel was recommended.

As the storm hovered over Williams, Kaibab National Forest offices, city of Williams facilities and numerous restaurants and stores closed as students and employees were advised to stay home.

Snow began falling in Williams late Wednesday with near white-out conditions prevailing in many areas on Thursday.

The 24-inch snowfall total for Thursday tied for the third greatest recorded daily amount in Williams according to the National Weather Service.

“The storm was extraordinary in being very cold, very strong and slow moving,” said Brian Klimowski with the National Weather Service in Flagstaff. “(It) increased in strength as it developed over Arizona.”

ADOT snowplows were running around the clock, and ADOT reported one tow-plow was knocked out of commission when it was sideswiped by a semitruck on I-40 near Parks.

The Arizona Department of Transportation began closing sections of northern Arizona highways early Thursday, beginning with the closure of I-40 near Kingman as multiple semi-trucks and other vehicles had slide-offs and blocked roadways.

I-17 northbound was closed at the turnoff to Sedona, State Route 89A in Oak Creek Canyon closed, and roads around Payson, Winslow and Heber-Overgaard closed. Later Friday, as the storm rolled east, portions of I-40 were closed near the state line.

Coconino County declared a state of emergency to allow the county to seek funds to deploy additional resources for road maintenance and emergency service personnel.

Navajo Nation President Jonathan Nez and Vice President Myron Lizer signed a declaration of emergency to allow local/chapter funding to be used to assist those in need with supplies such as fire wood, food, and other resources, and a Navajo Nation utility company had to restore power to 8,000 people after heavy snow and ice built up on electric lines.

The storm dumped nearly 3 feet of snow Thursday at the Flagstaff airport during the city’s snowiest day on record, and more than 2 feet in Payson, a town that sees that amount as its yearly average.

The Flagstaff airport was closed Friday.