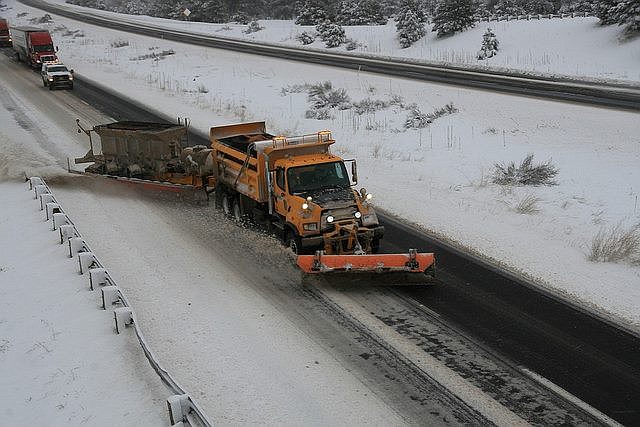 DPS reports that a semi-truck clipped a ADOT snowplow this morning near Parks. (photo/ADOT)

PHOENIX ‒ An Arizona Department of Transportation TowPlow helping remove snow and ice from Interstate 40 west of Flagstaff had to be taken out of service Thursday when a semitrailer clipped it while making an unsafe pass to the right.

The plow driver was unhurt in the crash, which occurred in the westbound lanes of I-40 near Parks, and ADOT lost the use of a rig that allows a single driver to clear two full lanes in one pass. The semi didn’t stop.

The TowPlow, a steerable trailer with a 26-foot blade that attaches to a regular snowplow truck, was taken to an ADOT repair shop, and crews hope to return it to service as soon as possible. The TowPlow is based in Williams, an area that sees heavy snow during winter storms. You can view an ADOT video about the agency’s TowPlows at youtu.be/I4daHL42TdQ.

It isn’t easy driving a snowplow on slippery roads with limited visibility, and other drivers make that job dangerous when they don’t give ADOT’s operators plenty of room to work. Respect the plow by staying at least four vehicle lengths behind and never passing a working snowplow until the operator pulls over to let traffic by.

"As I describe it, the weather's nicer behind the plow than it is in front of it," said Matt Bowles, who operates an ADOT snowplow on Interstate 17 and Interstate 40 in the Flagstaff area.

Other tips from ADOT’s snowplow drivers:

Never assume a snowplow operator knows you are nearby. If you can’t see the plow driver, there is a good chance the driver can’t see you.

Plowed snow can create a cloud that reduces visibility, and spreaders on trucks throw de-icing agents or sand that can damage vehicles, so stay back.

Leave space when stopping behind a snowplow. The driver might need to back up.

If approaching an oncoming snowplow, slow down and give the plow extra room.

Just because a plow has been through the area, drivers shouldn’t assume the roadway is completely clear of snow and ice.