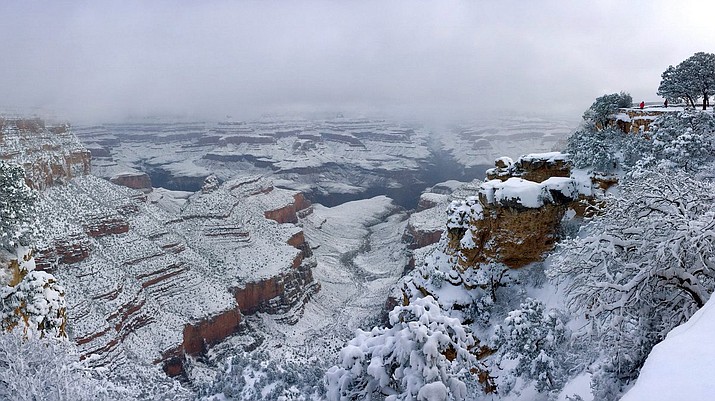 GRAND CANYON, Ariz. -- Theodore Roosevelt, a New York City statesman who harbored a longstanding love affair with the American West, made his way to the Grand Canyon for the first time in 1903.

President Theodore Roosevelt visited Grand Canyon for the first time in 1903, and the eperience was integral to the development of the Antiquities Act of 1906, which gave power to future presidents to declare national parks and monuments without Congress’ approval. (Photo/NPS)

His visit would mark the beginning of 16 years of wrangling to make the natural wonder a national park, a goal finally achieved just weeks after Roosevelt passed away. President Woodrow Wilson signed the Grand Canyon National Park Act Feb. 26, 1919, creating the national park visited by more than 6 million travelers each year.

In celebration of turning 100 years old, the park is hosting a commemoration ceremony from 10 a.m. to 4 p.m. Feb. 26 at the Visitor Center Plaza. In honor of the occasion, no fees will be collected, and the event is free and open to the public.

Commemoration activities will start at 10 a.m. with cultural demonstrators and family activities at the Grand Canyon Visitor Center on the South Rim. Flagstaff's Sechrist and Knoles Elementary school choirs will present two concerts in honor of the Grand Canyon at 10 a.m. and noon. Visitors are invited to participate in the commemoration ceremony at 1 p.m featuring remarks from Grand Canyon National Park and Grand Canyon Conservancy leadership, and a commendation reading and plaque reveal by Arizona Secretary of State, Katie Hobbs. After the ceremony, Grand Canyon School’s fourth grade class will lead a Happy Birthday sing along.

In the evening, visitors are welcomed to join Sunny Dooley for a program on Diné winter stories at 7 p.m. at the Grand Canyon Visitor Center Theater.

Visitors are encouraged to join the fun online by following Grand Canyon National Park and Grand Canyon Conservancy on Facebook and Instagram for special contests and activities.

Prior to 1906, the power to create national parks resided solely with Congress, and it was a right that many lawmakers of the day were hesitant to give up amid fears of a president using federal powers to override state lawmakers’ wishes and intense pushback from ranchers, miners and other business interests who were previously able to do as they pleased.

That changed with Congress’ approval and Roosevelt’s signing of the Antiquities Act, which gave the president power to declare national monuments and parks when there was no consensus in Congress, provided that the area declared was limited to the smallest area compatible with proper care and management of the objects to be protected.

The smallest area compatible, however, was left to the president’s discretion. 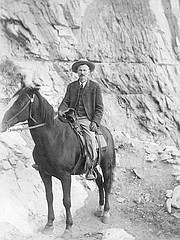 Grand Canyon businessman Ralph Henry Cameron fought the designation of Grand Canyon as a national park as it would force him to give up his business and mining claims in the area. (Photo/NPS)

Two years later in 1908, Roosevelt created Grand Canyon National Monument by executive decree. The order placed the lands under protection of the U.S. Forest Service and banned settlement of the area (not including Native American tribes) and destruction of any feature of the monument.

Tourism was growing, however, and some pioneering entrepreneurs like Ralph Henry Cameron used mining claims to lock down areas of the monument, building crude hotels, tent camps and outhouses for which they charged exorbitant fees. Cameron fought the designation of both the monument and the national park.

A year after the park was designated, the U.S. Supreme Court ruled against Cameron’s commercial interests and ordered him to abandon all his mining claims within the park. In 1926, Cameron finally lost his Senate seat and was unable to use his political affiliation to continue doing business in the park.

In addition to events being held in the park throughout the year, activities will take place throughout the state of Arizona, including public events in Phoenix, Tempe and Flagstaff, among others.

A full list of centennial events is available at www.nps.gov/grca/getinvolved/2019-centennial-events.htm.