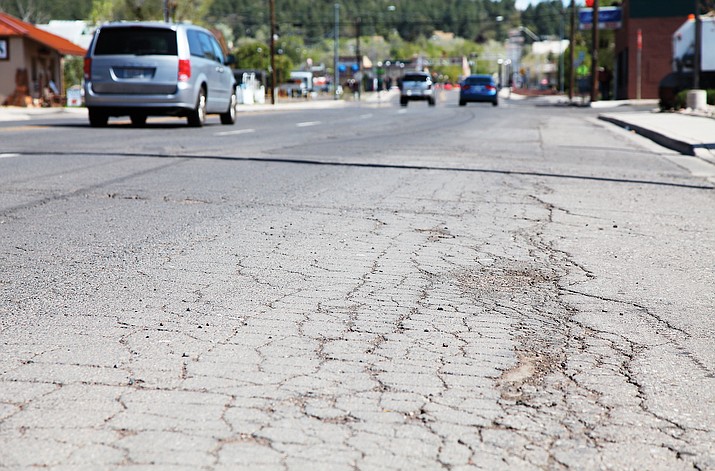 The city of Williams has awarded a contract to make improvements to Grand Canyon Boulevard. The city hopes to begin the project this spring. (Ryan Williams/WGCN)

WILLIAMS, Ariz. — L.P.’s Excavating has been awarded a contract with the city of Williams for improvements to Grand Canyon Boulevard.

The city hopes to begin the project in spring 2019, which will include repaving and realignment of portions of the road.

“In a perfect world, if the weather holds up, we would like to begin preliminary work in March,” said Mayor John Moore.

According to Moore, the road will be widened back to four lanes in specific areas.

“It will be wider by the ball fields,” he said. “It shouldn’t change the area that much, but the engineers believe it will make it safer.”

L.P.’s Excavating was one of six bids the city received for the project. The city’s engineer, Woodson Engineering and Surveying, recommended L.P.’s Excavating based on the lowest bid and other factors.

The total project is estimated at $1.5 million, with $464,000 coming from a Highway User Revenue Fund (HURF) grant from the state of Arizona and approximately $1 million coming from the city of Williams.

Moore said the preliminary work will include relocating some utility lines.

“The road will be open for the most part because it is a main intersection into Williams,” he said.

Moore said the city plans to continue upgrades to roads and streets throughout Williams this year.

“We’re going to do more this spring,” he said. “We’re going complete some areas that we started last year and we hope to begin work on Rodeo Road if the money is available.”

According to Moore, Williams’ sales tax is up four percent over the previous year.

“So we have a little money that we can spend to do some things,” he said.

At the Feb. 14 council meeting, Mayor John Moore announced the retirement of Recreation Director Rose Newbold. Moore said he has asked councilmembers Lee Payne and Dawn Trapp to be liaisons with the recreation committee on the search for a new director.

After several months without a city manager, Moore announced that the city has begun the process of searching for a candidate for the position. He said the city plans to expand its search further than they have before to draw more applicants.

Additionally, the city has several other request for proposals for city operations. The city is accepting proposals from qualified individuals and businesses for certified water operator services. It seeks a certified water operator to operate, maintain and manage its water supply system, water treatment plant, wastewater treatment plant, water production wells and related facilities and equipment. Details about the proposals can be found at the city’s website.

The city of Williams is also seeking a qualified aviation consultant to provide airport engineering, design, construction management and consulting support services for projects at H.A. Clark Memorial Field. All work will be accomplished in accordance with all federal, state and local guidelines, regulations including FAA Advisory Circulars, E.P.A. and Arizona Environmental Statutes.

The airport consultant services are of architectural, civil, geotechnical, structural, mechanical and electrical engineering nature. The anticipated basic services may include engineering designs, plans, studies, technical specification preparation, construction administration, inspections, grant application preparation and other general consulting services as may be required by the city.

Rodeo Road ready for traffic
Work to start on Morse Avenue
Road access improvements underway at future water tank site
Streets on the road to completion
Photos: Before and after
Event Calendar