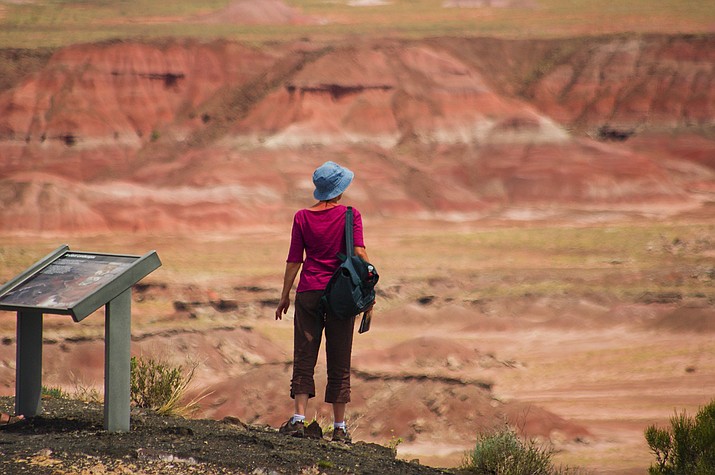 A visitor stops at the Petrified Forest National Park, one of many national and local sites in Arizona that have benefited from the Land and Water Conservation Fund over the years. (Photo courtesy National Park Service)

WASHINGTON — After months of gridlock, the Senate overwhelmingly approved a bill that permanently authorizes the Land and Water Conservation Fund, a program that has sent almost $240 million to Arizona for parks and open space projects.

The fund was the biggest part of a sweeping 698-page public lands package that includes everything from local land transfers to wildfire initiatives to the designation of a National Nordic Museum.

But lawmakers and advocates agreed that the most important part of the bill was the fund, which uses revenue from offshore oil and gas leases to fund federal, state and local open space and recreation projects.

Since it was created in 1965, the fund has collected $40 billion and allocated close to half that, but the law authorizing the fund expired Sept. 30.

According to the Land and Water Conservation Fund Coalition, Arizona has received $239.5 million from the fund over the years. The money has gone to projects at Grand Canyon National Park, Lake Meade and Saguaro National Park, as well as to state parks like Lost Dutchman and Patagonia Lake. It has also been used for local parks and recreation facilities.

Lawmakers came up with a bipartisan plan to save the fund last year, but it never got out of the House.

The latest version is expected to pass the House, however, after sailing through the Senate on a 92-8 vote Tuesday. A spokesman for House Natural Resources Committee Chairman Raul Grijalva, D-Tucson, said he hopes to bring it before the committee as soon as possible, perhaps by the end of this month.

“This is a genuine bipartisan success story,” said Aaron Weiss, deputy director for the Center for Western Priorities. “It’s incredibly rare to see these days.”

Weiss said the fund “has touched every congressional district in the nation.” He said lawmakers agree on almost every part of the bill, which includes scores of local projects as sweeteners.

Arizona Sens. Kyrsten Sinema, a Democrat, and Martha McSally, a Republican, hailed the passage of the bill, noting that it included approval for federal-state land swaps across Arizona. They ranged from 9.5 acres in Coronado National Forest to be made available to private landowners, to as many as 8,800 acres to La Paz County for development of a solar power project there.

Sinema called the bill “a win for Arizona” and said in a statement that it will “spur job creation in rural Arizona and protect our public lands for future generations of Arizonans.”

McSally welcomed the inclusion of the Public Land Corps program, a proposal first pushed by the late Sen. John McCain that is aimed at combating the backlog of maintenance on public land. Corps volunteers would be between 16 and 30 years old and would work for partner organizations in states around the country.

“The legislation would expand the Public Lands Corps by many thousands of volunteers, including young Americans, Native Americans and returning veterans and make it easier for civic-minded individuals to serve in the great outdoors,” McSally said in a statement.

The bill includes scores of such proposals, a grab-bag of legislation often going back years. Grijalva first introduced legislation to create a Santa Cruz Valley National Heritage Area in Pima and Santa Cruz counties in 2007. It is included in the bill.

Not everything in the bill was a local land project. One section calls for greater use of technology, such as drones, to combat wildfires, while another calls for the creation of a national volcano early warning and monitoring system.

Even though the bill makes the LWCF permanent, advocates noted that the allocations could vary from year to year and there is no guarantee the money will be spent. Weiss said he hopes the fund does not become “a political football” for Congress over allocations.

He said the fund has served a vital role because it “fills holes in the parks” that he said often look like Swiss cheese — federal lands dotted with private property.

Dahl said there is still work to be done, even after the bill wins final approval. At that point, he said, “we start the process for the next public lands package,” which the Arizona NPCA hopes will include land for the Casa Grande ruins, Saguaro National Park and the Fort Bowie historic site.

But it’s not just large and historic sites that can benefit. Like many others, he said, “I’ve played softball on fields funded by the LWCF.”