Lady Vikes stopped in first round at state tourney 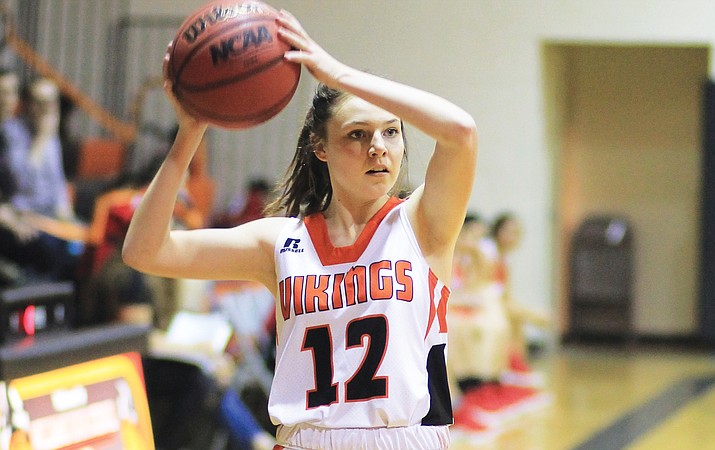 Viking Maegen Ford looks to pass in an earlier game with Grand Canyon. The Lady Vikes made it to the first round of the 1A State Tournament Feb. 15. (Wendy Howell/WGCN)

Rock Point advanced to the second round where they beat St. David 56-42. Rock Point next plays in the quarterfinals with No. 5 Mogollon. No. 11 Red Mesa upset No. 2 Anthem Prep 57-36 Feb. 16 and will face Baboquivari in the quarterfinals Feb. 22. The championship game is Feb. 23 at Finlay Toyota Center in Prescott Valley.

Viking sharp shooter Sydnee Mortensen was held to just nine points in the game, with Maegan Ford leading the Vikes with 10. Mortensen went 3 for 5 in free throws, had four rebounds and six steals. Amaryssa Orozco brought in eight rebounds and Aaliyah Alvarado brought in seven. Madi Olson had five steals.

The girls finished the season 14-14 overall and 4-4 in the 1A Central Region.

The Vikings boys’ team failed to make the playoffs, but the No. 14 Ash Fork Spartans made the first round where they lost to No. 3 Ft. Thomas 83-57. Ft. Thomas beat Mohave Accelerated in the second round and continues play in the quarterfinals Feb. 22 along with Mogollon, Ray and The Gregory School. The championship game is Feb. 23.