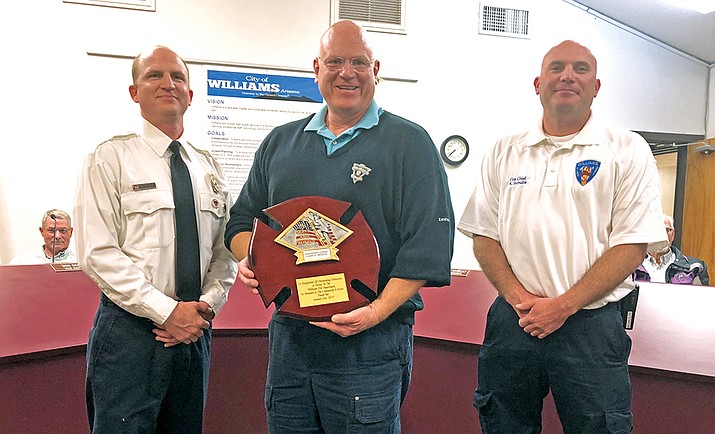 John Moede (center) was honored by Williams Volunteer Fire Department Feb. 14 for his service with the department. (Wendy Howell/WGCN)

Former Fire Chief Chase Pearson presented Moede with an award for outstanding dedication to the department and the community.

Moede resigned from the department in December after serving as a support member, firefighter and assistant chief for the past seven years.

“I learned a lot from John over the last two years working with him,” Pearson said. “I know a lot of other folks have said the same thing.”

Pearson said Moede not only shared his expertise as a firefighter, but also diligently worked to find funding through grants for the department.

Originally from California, Moede retired from the Los Angeles Fire Department after 28 years where he served as a captain. He then worked as the Emergency Management Coordinator for the city of Scottsdale for five years.

He and his wife, Kerry-Lynn, have lived in Williams for the past 13 years where they both are known for their dedication to the community.

“He’s made a positive lasting impact on the community,” Pearson said.