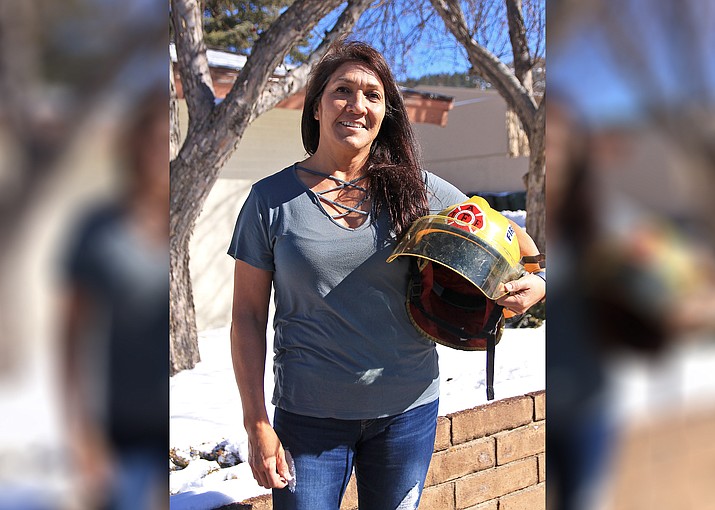 Curry has been a firefighter with the Williams Volunteer Fire Department for more than 11 years and recently announced her retirement. (Wendy Howell/WGCN)

WILLIAMS, Ariz. — For more than 11 years, Anna Curry has been a pillar at the Williams Volunteer Fire Department, serving her community honorably. She is now leaving it in the hands of her fellow firefighters after she announced her retirement last December.

“It has been a big part of my life,” Curry said. “There is a bond, whether its wildland fire, structural fire or volunteer. We are volunteers and we have a special bond.”

Of the roughly 29,727 fire departments across the country, nearly 67 percent are run wholly by volunteers, including Williams, according to a 2017 report by the National Fire Protection Association.

The NFPA determined in 2015 there were 814,850 volunteers staffing departments across the country; however, just nine percent were women.

Around 2002, after years of working alongside her husband in the concrete business, Curry decided she would become a firefighter. She considered joining the Chino Valley Fire Department, but realized there was a need right here at home.

The time she spent in the concrete business helped her develop many contacts and friendships throughout the Williams community. These friendships helped her in the decision to become a firefighter.

“A lot of the other firemen knew me through the business, they knew I did concrete,” Curry said. “They had confidence that I could do it. They knew I was strong, they didn’t question my strength.”

Physically fit for the job

The NFPA found that in 2017, a total of 60 firefighters died while on-duty in the United States. Of those 60 deaths, 29 of them were attributed to cardiac arrest.

In her first year, Curry attended numerous training opportunities and learned the business of being a firefighter during a probationary period. She also knew being in shape was an integral part of the job.

“The physical fitness part didn’t stop me,” she said. “Everything was unlimited — I didn’t have a fear of those things.”

Curry valued her time in the concrete business where she built up her cardiovascular and muscle strength which enabled her to transition to carrying 50-60 pound firefighter packs.

“It didn’t bother me because I had a lot of upper body strength,” she said. “But you’re wearing a respirator and back then the bottles were 45 pounds.”

Despite already being in shape, Curry said she still pushed herself daily to perform at her best.

“I trained at the station wearing my pack and doing the step,” she said. “I trained by myself for an hour so I could be prepared for anything.”

Many people are working to break the barriers that are preventing more women from becoming firefighters. Some of the women have experienced sexual harassment and/or skepticism of their competence as firefighters.

However, Curry said she has always felt welcomed among her many male colleagues at the Williams department.

“They treated me like their buddy,” Curry said. “I wasn’t as strong as some of them, but I was strong. I carried my own weight. I never wanted to be a liability.”

Not only is firefighting a physically demanding occupation, but it also takes its toll emotionally.

In small fire departments like Williams, firefighters are not merely responding to fire calls but are also expected to answer calls for emergency medical services, automobile accidents and searches for lost or injured people. Firefighters are exposed to burn victims, severely injured victims and violent deaths. Doing their job, it’s highly likely firefighters will face a number of different traumatic situations.

For Curry, she distinctly remembers developing post-traumatic stress disorder from a horrific automobile accident on I-40 several years ago.

“It took me about six months (to work through) and then I was okay,” she said of the accident that claimed the lives of an entire family except for one young girl. “I don’t know what happened to her. When you rescue people — I don’t know if it’s harder for females — but I think as women you feel it. You have kids, you can relate."

But Curry said she is grateful to have been there for people who may be experiencing the worst time in their lives.

“Sometimes the people were already out and everybody was safe, sometimes it wasn’t bad. For every call you are just happy to be there and you gain just a little bit more knowledge," she said. "(As I became older) I began looking at people differently and I could see how tragedies affected them.”

Curry said relying on her fellow firefighters was important and she said she has developed lifetime friendships with many of them.

“Every call is different and you build those bonds with people and they may not be the same people you go on the next call with,” she said.

Despite the challenges of handling traumatic calls, Curry said the hardest part of her time as a firefighter was the calls she wasn’t able to respond to because of her commitment to her career with the city of Williams.

“I was limited, and that’s hard,” she said. “I sometimes couldn’t go on a 2 p.m. call because it impacts my job here.”

Curry said volunteering and working a full-time job could often be challenging. She said the department had around 100 calls in 2018, and dozens of hours of training.

“We are defined as firefighters but we had multiple tasks,” she said. "We have to know everything from wildland fire to trucks to extrication. We have to know it all.”

Each year the department sends firefighters to training across the state, including classes at the Arizona State Fire School. Firefighters choose from a variety of classes ranging from basic fire skills to emergency driving, fire hydraulics, rope rescue, vehicle stabilization and more.

“There are all these opportunities, you have to pick,” Curry said. “You have to know your chemicals for hazmat, some rope rescue, swift water rescue…”

Curry said training was important to stay on top of the latest developments in firefighting and rescue. She said several members recently attended training on how to handle electric cars, since firefighters disconnect the power supply in automobiles before attempting rescue.

“Normally you have your red and black to disconnect,” she said. “With Tesla, you don’t want to cut the wrong one. New cars have different battery placements.”

Looking back, Curry said there are many things she will miss about the years of service on the Williams Volunteer Fire Department. She said it is encouraging to watch more females entering the field.

“I don’t know if I have advice, but I’d encourage them,” she said. “If they have the spark of interest, but are apprehensive because of the strength, well try it. Get yourself in shape, just keep trying.”

Curry said it will be hard to watch others respond to calls and not be joining them. However, the physical part of the job and the time commitment have taken their toll and she’s ready for the change.

“Being a volunteer is an honor,” she said. “I’ve been here 26 years, it’s nice to help your neighbors and friends. You’re serving your community, you just want to help people.”