Just like grandma's: Chicken Kitchen to open for all day eats in Tusayan 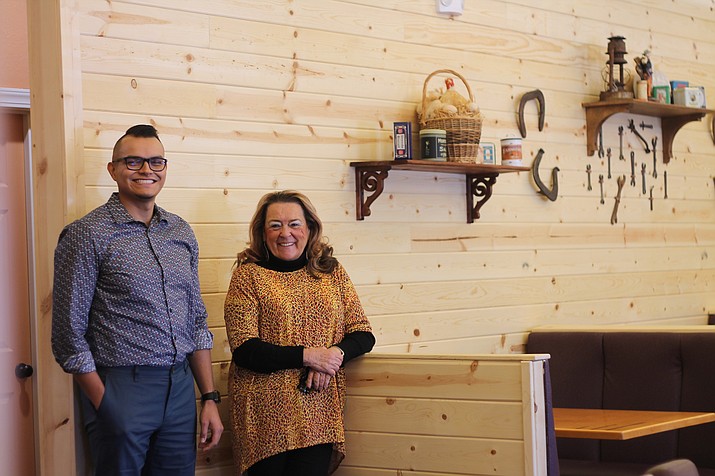 GRAND CANYON, Ariz. — Families looking for a friendly, affordable meal in Tusayan before a long day at the Canyon can look no further than the Chicken Kitchen, which opens Feb. 15 next to the Grand Canyon Visitor’s Bureau.

Featuring a menu full of home-cooked favorites like chicken and waffles, biscuits and sausage gravy and of course fried chicken, general manager ClayAnn Cook said the idea was to create a restaurant that was comfortable, inviting and affordable for families.

“The concept for the restaurant was Elling’s (Halvorson) idea,” Cook said. “We need more restaurants in Tusayan — there are lines falling out the door at McDonald’s, Wendy’s, Big E’s. We needed an affordable restaurant for families to bring their kids for a good meal.”

The restaurant is also one of the larger venues to serve all-day meals, starting with breakfast from 7-11 a.m. Once the peak season begins in April, the restaurant will open at 6 a.m. to serve those who want to get an early start at the canyon with portions that provide more than enough energy through lunchtime.

Those looking for something on the lighter side can find it on the breakfast menu, with options like steel cut oatmeal, fruit and granola or egg white omelets. That’s where the weight-conscious options end, though, according to Cook.

“This is good, old-fashioned food,” she said. “Everything is made with real butter, real cream. If you’re looking for super healthy food, this isn’t it.”

Taking the helm as manager is Daniel Rivera, a lifelong member of the community and graduate of Grand Canyon High School. Rivera worked for Cook at Big E’s after graduating until leaving for Central New Mexico Community College, where he graduated with honors with an associate’s degree in accounting. But even while he was away, the community called to him, and he returned home on breaks to work at Big E’s for about six years.

“I was coming back every summer to work to pay for school, then I got out of school and ClayAnn offered me a position as a manager at Big E’s,” he said. “I got a little bit of training over there, and then the Chicken Kitchen was ready to open, so I came over here and I’m super excited.”

Rivera said he loves the Grand Canyon, and it’s nice to stay in the community.

“It’s just so calming, the nature, it’s just a beautiful place,” he said. “It’s something you either like it or you don’t and I like it here.”

Like Rivera, much of the kitchen staff has also worked for Cook for a number of years, a fact she is most proud of. Cody Wilson, the head chef at Big E’s, will oversee both kitchen staffs.

The restaurant has had a complete overhaul since its days as Sophie’s Mexican Kitchen. Renovations included tearing out the entire kitchen and bringing in new upgrades and equipment, including a pressure fryer that Cook said was able to prepare 28 pounds of chicken in about 17 minutes.

Rivera said Cook has a vision for the Chicken Kitchen since the beginning, from the decorations to the menu. In fact, Cook has spent the last three months poring over eBay, looking the perfect accessories to decorate both the farm and kitchen sides of the restaurant. She wasn’t buying large lots, either — the décor represents hundreds of searches and purchases to get the feel just right. And while most of it was bought with the intention of decorating the Chicken Kitchen, a few of the items have a more local provenance.

The selection of John Deere memorabilia, for instance, is part of Cook’s own collection, and some of it came from just down the road in Williams, purchased over the years from Twister’s diner. Community member Debbie Davis contributed the entryway sign, and Cook said a friend donated what is possibly the restaurant’s quirkiest decoration — a real, taxidermied chicken sitting in a basket surrounded by eggs.