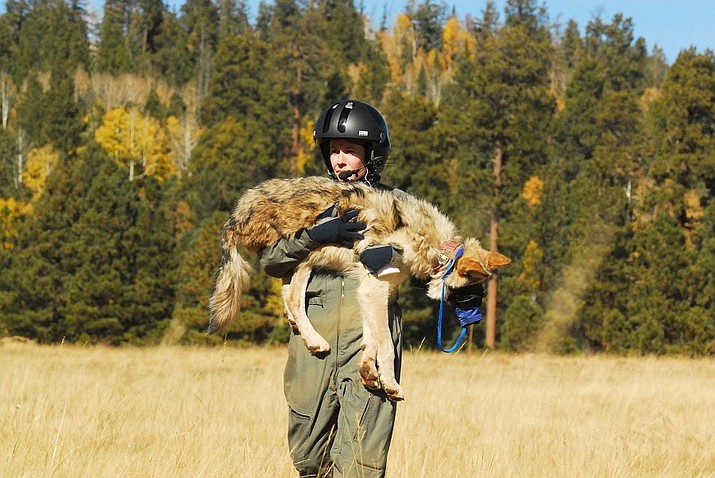 PINETOP, Ariz. — Residents of Alpine, Arizona, Reserve, New Mexico and surrounding areas may notice a low-flying helicopter in the region between Feb. 7 and Feb. 20 as biologists conduct their annual Mexican wolf population survey and capture.

“Each year this survey is done in the wintertime to provide a snapshot of the Mexican wolf population, by collecting critical data to help partner agencies make sound management decisions in the Mexican Wolf Recovery Program,” said Paul Greer, AZGFD Mexican Wolf Interagency Field Team leader. “Additionally, data collected helps us know how these animals are using habitat in Arizona and New Mexico.”

As part of the operation, biologists will attempt to capture selected wolves born in 2018 that have not yet been fitted with a radio telemetry collar, in addition to those with collars that need a battery replacement or any wolf appearing to be sick or injured. Wolves are captured after being darted with an anesthetizing drug from a helicopter containing trained personnel.

After being immobilized, the wolf is then brought by air to a staging area for processing and any necessary veterinary care. The wolf is then returned to the Mexican Wolf Experimental Population Area (MWEPA) and released on public land.

The field team is contacting private landowners to gain permission to property to capture a wolf, if necessary, and will be coordinating with land management agencies and county sheriff offices on survey operation details.

Results of the survey will be made available to the public in March.