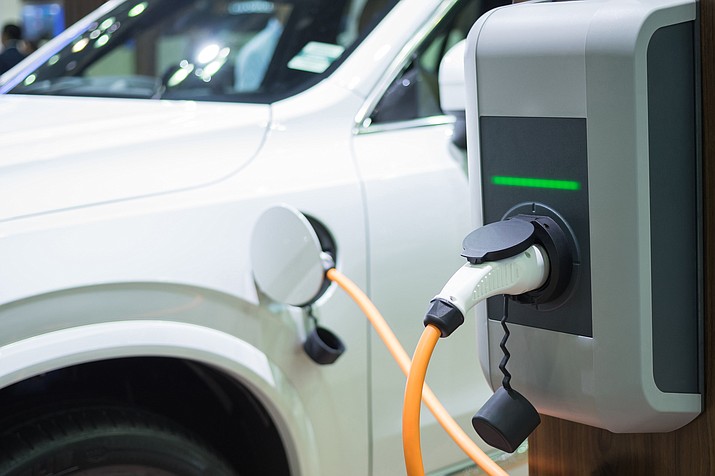 Yavapai Lodge has installed electric vehicle chargers for both guests and visitors in the last four months. (Stock photo)

Amy Neil, director of lodging for Delaware North, which operates Yavapai Lodge and the adjacent General Store, said the company installed electric vehicle chargers for the general public between the two properties about four months ago, and later installed another set for lodge customers.

Delaware North has installed electric chargers for both locals and visitors at Yavapai Lodge. (Erin Ford/WGCN)

Neil said although there hadn’t necessarily been a high demand for the chargers, the company is thinking toward the future and is looking at finding ways to get people to come and use them.

“The ones by the general store have seen some use with people passing through, and even some of the locals are stopping by to use them,” she said.

“They’ve only been here a few months during the cold season, but I feel like they will see more use during the summer months.”

More electric vehicles passing through the area is something that Tusayan firefighter Mac Mercolini has also noticed, noting that he pays attention to what kind of vehicles are passing by the station on Highway 64 so that he can help other first responders prepare to work with them should an accident occur.

Mercolini said he has noticed more and more electric vehicles coming through, which he attributes to visitors’ desire to drive something with a more exotic appeal.

“People coming in from the big cities like Phoenix or Las Vegas, they don’t always want to rent a Ford pickup,” he said. “They’re looking for something a little more exotic.”

And Mercolini has taken it upon himself to ensure that the department’s other first responders are prepared to work on one of those vehicles.

For starters, normal methods won’t apply to extricating someone trapped in an electric vehicle. Mercolini said one of the first things responders do is cut the battery cables, which in the case of an electric vehicle would electrocute the responder.

Mercolini has lined up a few training videos provided by manufacturers like Tesla to teach the basics, and the company has also included tabs, handles and instructions for first responders to safely stabilize the vehicles.

Although new methods of manufacturing vehicles represents a constant need to adapt for first responders, Mercolini said anything that makes a vehicle safer, such as tougher steel alloys, is a positive thing.

“It’s up to us to adapt and stay updated,” he said.