Engine No. 3 arrives in Williams to be displayed at future State Railroad Museum 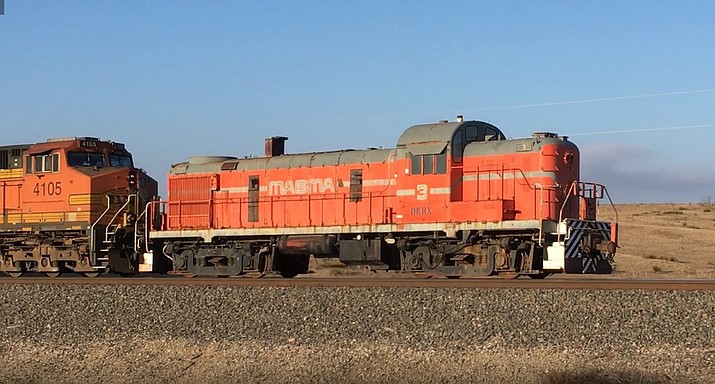 Magma Engine No. 3 on rear end of a train prepares to leave Amarillo, Texas on its way to Williams, Arizona to be displayed in the future Arizona State Railroad Museum. (Photo/Pete Kahon)

WILLIAMS, Ariz. — The newest acquisition for the Arizona State Railroad Museum (ASRM) arrived in Williams early on the morning of Jan. 31, completing a journey that began in 1955.

Built by the American Locomotive Works (ALCo), Engine No. 3 was purchased by the Magma Copper Company and shipped to its San Manuel Arizona Railroad operations, where it served in the mines and area for 44 years. After it was declared surplus by the railroad, it was sold in 1999 to the Backlands Railroad in Sulfur Springs, Texas. They later sold it to Jim Terrell in 2004, who then donated it to the Oklahoma Railroad Museum where it resided until acquired by the Arizona State Railroad Museum Foundation in 2018.

In October 2018, the ASRM Foundation began the process to return Engine No. 3 to its home in Arizona. This was a four month long odyssey that included mechanical work by the Oklahoma Railroad Museum staff and volunteers to prepare it for movement on its own wheels. BNSF management, mechanical and operations worked with ASRM to make that move possible. Once cleared, it had to be moved from the Oklahoma Railroad Museum by Union Pacific Railroad and Stillwater Central Railroad to the BNSF in Oklahoma City. From there it moved across Oklahoma, Texas, New Mexico and finally Arizona. Once in Williams, the Grand Canyon Railway assisted by moving her to a track with other museum artifacts.

Over the years, Magma and San Manuel Arizona Railroad changed the basic color of its livery four times and Engine No. 3 will be restored to her 1989 Magma livery. It will serve as the center piece and backdrop for the people stories portrayed in the exhibits of Arizona’s mining railroad communities at the ASRM when it opens.