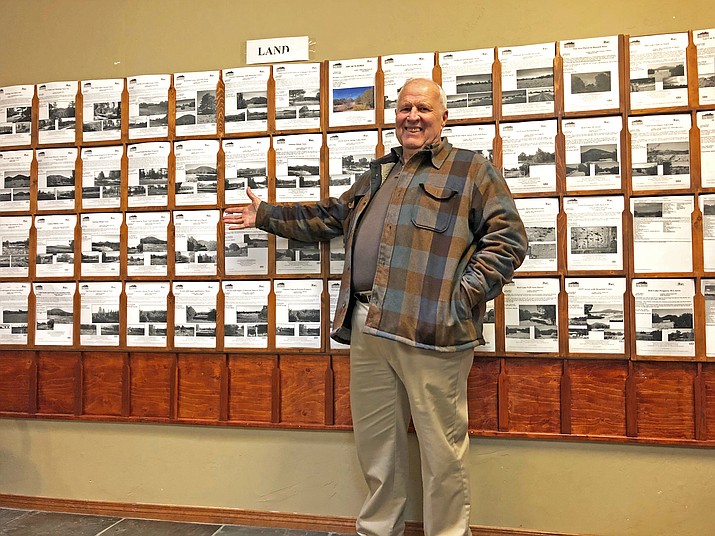 Bill Miller, a realtor with the former Williams Realty, is now working with Banker's Real Estate in Williams. (Wendy Howell/WGCN)

WILLIAMS, Ariz. — Home buyers and sellers in Williams are going to have to drive to a new location to find one of their favorite local realtors, as Bill Miller, formerly of Williams Realty, has up and moved locations to Banker's Real Estate.

Miller was a broker/owner for Williams Realty for 18 years. He decided to downsize.

"When you have a storefront, you have to be there," he said. "I didn't want to be there all the time, but I still enjoy real estate."

Miller will continue to focus on the Williams area as a broker/realtor.

"I have a lot of my old clients that have followed me over," he said.

Miller moved to Wiliams from Newport Beach 18 years ago. He started as a realtor there in 1996. Prior to that he was deputy sheriff for 33 years for Orange County.

He always enjoyed real estate but never had time for it, he said.

Once he retired he jumped at getting his license.

In 2000, he moved to Williams to get away from high density living.

"When you're involved with a career you don't think about it, you just go do your job," he said. "But once you kind of retire then you realize there is traffic all day long and all night long."

Miller became interested in Williams through a coworker who often visited the area.

"My wife and I were on a trip to Lake Powell and we stopped at a rest stop outside of Flagstaff and realized we really liked the area," he said. "On our way back we went through a snowstorm — it was Valentine's weekend — and being from southern California we though it was really cool."

Miller said his coworker was apprehensive about moving to Williams because he heard many people had to haul their own water.

"I thought if we have to haul our own water that means there aren't going to be a lot of people who want to go there and there will be a low density population," he said.

Miller said he came back and bought a parcel of land and then a house and has remained ever since.

He now lives on 13 acres with plenty of buffer from neighbors.

"Its going to be hard to leave that place," he said.

Miller and his wife purchased an old gas station on Route 66 across from Twisters when they first arrived in Williams.

"At the time it was the ugliest building in town, I felt sad for it," he said.

Miller said he decided to go back to school and become a broker.

He opened his office in the old gas station after renovating and expanding it.

"Almost every buyer I've encountered over the years has worked in that gas station," he said.

Miller and his wife built a building next to the old gas station and his wife, Sierra opened a Christmas store.

Eventually Miller bought a building on Grand Canyon Boulevard for his business. "I called it a boutique brokerage," he said. "We saw all kinds of people, I enjoyed it."

Miller said hopes to spend more time doing the things he came to Williams to do now that he is with Banker's.

"I like being outside," he said. "But I enjoy real estate too."