What to do if stranded in wintry conditions: Recent tragedy spurs county to provide tips 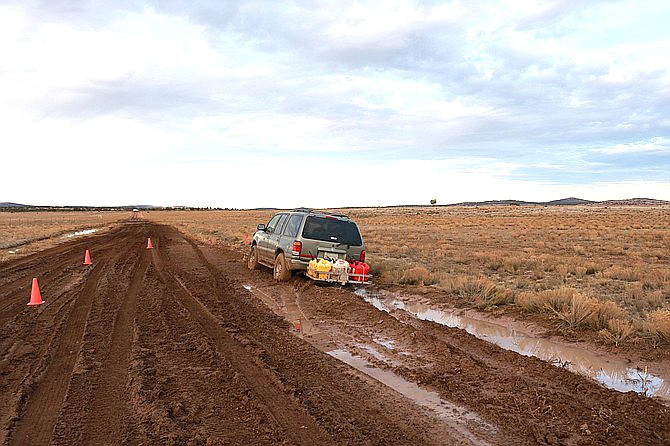 A vehicle belonging to a married elderly couple is mired in the mud near Ash Fork. The couple was found frozen to death about a mile from the vehicle Dec. 6. Police believe they tried to walk to their home after the vehicle got stuck in the snow. (YCSO/Courtesy photo)

ASH FORK, Ariz. — On Dec. 6, the bodies of a married elderly couple were found about a mile from their home off Crookton Road in Ash Fork.

An investigation by police and an autopsy by the Yavapai County Medical Examiner’s Office indicated that the couple died from exposure to the elements.

“It appears the couple’s vehicle became stuck during a snow/rain/weather event as they were heading home,” said Dwight D’Evelyn with the Yavapai County Sheriff’s Office (YCSO). “As they were relatively close to home, it is conjecture the couple thought they could reach that destination.”

Cellphones were found with the bodies. The most recent call activity was at 12:17 p.m. Nov. 29, D’Evelyn said. That night, the temperature in Ash Fork dropped to as low as 24 degrees, and the area had just received between 10 and 13 inches of snow, according to the National Weather Service office near Flagstaff.

Detectives have not determined who they were trying to call at the time, but there is no indication that they made any calls to 911 or emergency services, D’Evelyn said.

Without knowing what the couple was thinking at the time, D’Evelyn said the best decision in situations like this is to typically stay with the vehicle.

“Emergency services were located throughout the area assisting motorists and stranded individuals,” he said. “When detectives checked the vehicle, it started right up and had plenty of gas.”

So as to help prevent something like this from happening again, the YCSO has shared the following ways for people to better their chances of survival if they find themselves stranded in wintry conditions:

• A working cellphone is critical to have with you during winter travel. A 911 call will provide GPS coordinates to your location if you can’t provide that detail otherwise.

• Stay in your car! It is a shield and shelter from the weather and cold. Run the heater if it is safe.

• If no cellphone is available, honk the car’s horn occasionally, flash the headlights, light a road flare, blow a whistle, tie a bright object or piece of clothing to the antenna or at the top of a rolled-up window — do anything to bring attention to your location. “In the case of the Ash Fork Couple, it may have been possible for neighbors to hear or see the couple’s car if something caught their attention,” D’Evelyn said.

• Run the car no more than 15 minutes each hour or so to save gas. Turn off accessories when the car is not running to save battery power. If possible, make sure the tailpipe is not blocked.

• Layer up — The more you cover up the better. Even floor mats can provide some warmth. Drink water if available — doing so helps regulate body temperature and can lessen the chance of hypothermia.

• If you are with someone, stay close to each other — move arms and legs occasionally for blood flow.

• When possible, listen for nearby sounds — you may catch rescue personnel calling out to find you.

• If possible, do not leave main roadways — They may be slow or blocked, but it is the safest place in such conditions. Be patient.