Notes from the publisher: Let's not carry bullying into the New Year 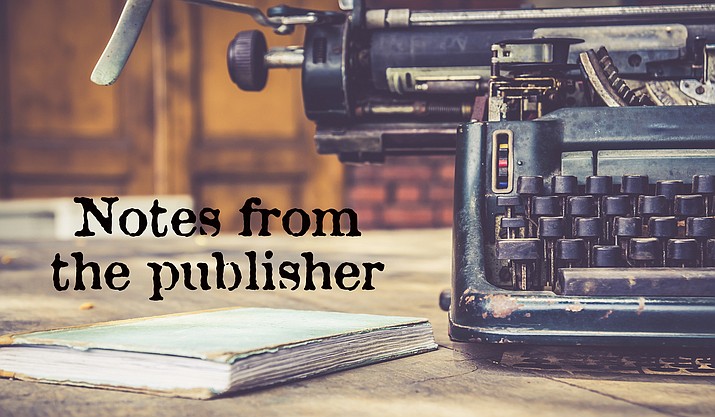 As we wrap up another holiday season with the credo “be kind to one another,” it is discouraging to note that bullying is alive and well in America.

Whether it’s our federal politicians, the schools, the workplace, social media, your church or even your fellow automobile drivers, it is frustrating to think that mankind hasn’t really changed all that much since we crawled out from under a rock. Some of us bully other people on a regular basis. By the way, what is it about people using their automobile fog lights when there is no fog and blinding other drivers in the process? Hmmm… I guess that’s just being inconsiderate and not really bullying other people.

It seems the politicians on both sides of the fence in D.C. persist in bullying one another and not doing the jobs they were elected to do. I won’t take a Democrat or Republican side on the impeachment fiasco — perhaps the best solution is to get rid of all of them in the next election? It’s too bad people in such powerful positions — the politicians — aren’t doing a better job of being role models. If we were in their shoes, I’m sure they would tell us our behavior was unacceptable and then create a new law to keep us “in line.” It is unfortunate that these same people will chide a professional sports star for their unacceptable behavior and yet it’s OK for them to do the same thing. Hypocrisy is alive and well in D.C. and that applies to a handful of Arizona folks who represent us there.

On a local level, whether it’s social media, schools, the workplace or just tooling around, it seems many people don’t use common sense. Some people my age (I’m an old guy) lose their filter and say or do the first thing that pops into their head; they have no patience or simply think doing things the same old way gives them the right to bully others into their way of thinking. Conversely, some younger adults think they are automatically entitled to get what other people have earned in life. In many cases they don’t really care what people with life experience have to say or contribute. Unfortunately, compromise and collaboration are replaced with bullying tactics such as devious manipulation to accomplish their own selfish goals. It seems that all too often people forget about the Golden Rule and replace it with “my way, my rules.”

As you enter the New Year, please keep in mind on a national level that the election is coming in November. On a local level take a look in the mirror and ask yourself if cooperation and collaboration as well as “Do unto others as you would have them do unto you” makes sense in your daily life.

Thanks for reading and thanks for writing to us. Remember, a free press is your First Amendment right.

Smartphones, Snapchat, Instagram transform how today’s teens bully each other
Pizza Factory trying to put an end to bullying with Buddy Bench donation
Letter to the Editor<br>Meaning of ‘Anyone But Bush” clarified<br>
Editorial<br><br>It’s time for those tricks <br>to come to an end in town<br>
Guest column: How can we save the world?