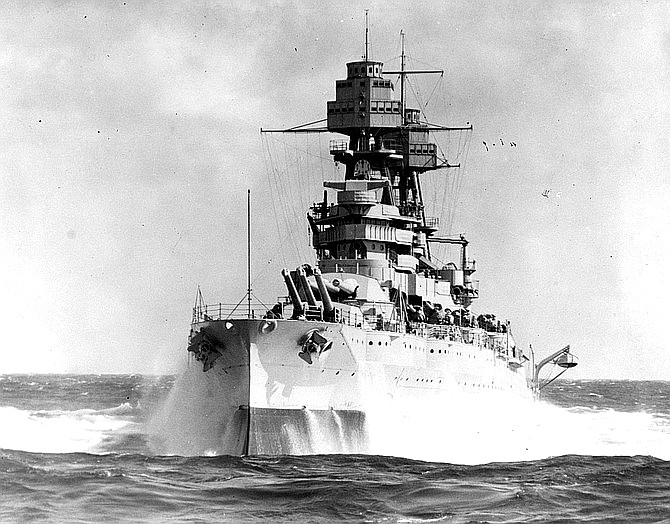 The USS Arizona pitching in heavy seas during the 1930s. Two new U.S. Navy submarines will revive the names of the USS Arizona and USS Oklahoma. (U.S. Navy Photograph)

PHOENIX - Nearly 80 years after its namesake was sunk, the Navy is getting a new USS Arizona.

Thomas Modly, the acting secretary of the Navy announced Dec. 23 that its two newest Virginia-class attack nuclear submarines will be named after two battle cruisers that were destroyed when the Japanese attacked Pearl Harbor in 1941. The other is the USS Oklahoma.

"It is my fondest wish that the citizens of the great states of Arizona and Oklahoma will understand and celebrate our Navy's desire to memorialize the 1,177 heroes who perished in USS Arizona and the 429 more in USS Oklahoma,'' Modly said in a prepared statement. He said the new ships will be "carrying the spirit of those heroes of the Greatest Generation as well as that of their families and the Grand Canyon and Sooner states as they sail through a new American maritime century.''

According to the Navy, the Virginia-class submarines are the latest generation of of attack submarines, replacing Los Angeles class subs, built for the Cold War, as they are retired.

Among the improvements are a fly-by-wire ship control that provides improved shallow-water handling, with enhanced ability to operate in coastal waters.

Traditional periscopes have been replaced by two masts that have visible and infrared digital cameras on top. That also means that the control room need not be at the top of the boat -- in the curved section -- providing more area.

The first Virginia-class sub, aptly named the USS Virginia, was put into service in 2004. The Navy currently operates 18 Virginia class subs with a length of 377 feet, speed of more than 25 knots and a crew of 15 officers and 117 enlisted personnel.

Gov. Doug Ducey, reacting to the announcement, said the ship and name hold special meaning for our country, its history and the people of Arizona.

"The commissioning of a new warship named Arizona honors our past, including those who have given their lives in service to our country, and our future and recognizes Arizona's important contributions to our nation and its defense,” he said.

The announcement comes weeks after the Navy awarded a $22.2 billion contract for nine new updated versions, with an option to for 10th submarine. 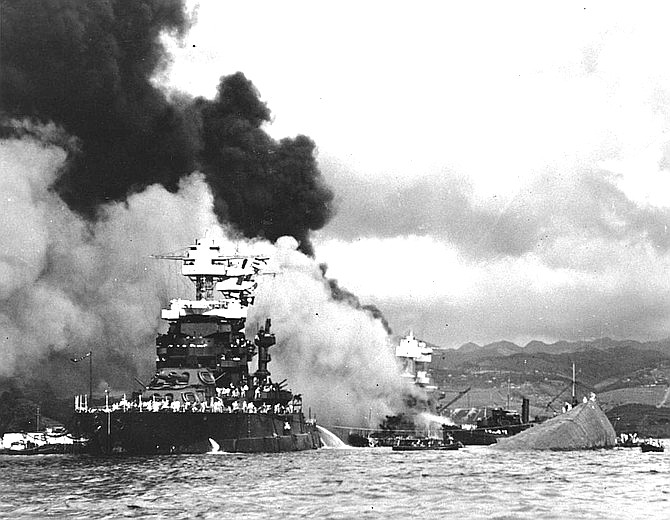 Part of the hull of the capsized USS Oklahoma is seen (at right) as the battleship USS West Virginia (center) begins to sink after suffering heavy damage, while the USS Maryland (left) is still afloat Dec. 7, 1941, in Pearl Harbor, Oahu, Hawaii. More than 75 years after nearly 2,400 members of the U.S. military were killed in the Japanese attack at Pearl Harbor some who died on Dec. 7, 1941, are finally being laid to rest in cemeteries across the U.S. After DNA allowed the men to be identified and returned home, their remains are being buried in places such as Traer, Iowa and Ontonagon, Michigan. (U.S. Navy photo)

About the original USS Arizona

Built at the naval yard in Brooklyn, New York, the USS Arizona—one of two Pennsylvania-class battleships at the time—was commissioned on October 17, 1916, making it the largest ship in the navy’s fleet. The ship remained stateside during World War I and was among the ships that escorted the USS George Washington, which was transporting President Woodrow Wilson, to the Paris Peace Conference in 1919.

The USS Arizona was stationed at Pearl Harbor on December 7, 1941 and came under attack along with other navy vessels stationed there. At approximately 8:10 a.m., the ship was struck by a 1,760-pound projectile, causing munitions and fuels to ignite and creating a massive explosion that eventually sunk the ship. Only 334 crewmembers survived; 1,177 perished with the ship. It was among four battleships sunk during the attack.

Unlike other ships, the USS Arizona was deemed “unsalvageable” and remains at the bottom of Pearl Harbor. On May 30, 1962, the USS Arizona Memorial was officially dedicated. Today, the memorial is overseen by the National Park Service and receives more than 1.8 million visitors annually.