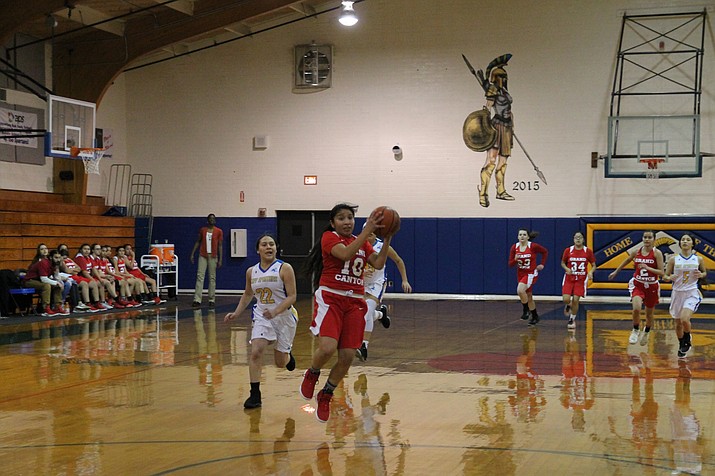 Savannah Longhoma catches a pass from Cayli Miles on a breakaway for an easy basket. (Erin Ford/WGCN)

GRAND CANYON, Ariz. — It’s a new basketball season and the Grand Canyon Phantoms are off and running with new teammates and a new coach.

Catheryn Redmon, new to the district this year, took over both the boys and girls varsity and junior varsity teams this year. With many years of basketball coaching and playing experience as a semi-pro, Redmon is bringing new energy and focus to the team.

Lady Phantoms pick up where they left off

The Lady Phantoms picked up right where they left off last year, notching double-digit wins over Holbrook Indian, El Capitan and Joseph City, although the team dropped hard-fought games to Williams and St. Michael.

The team was in great form Dec. 19 as the took on the Ash Fork Spartans on the road. Senior Cayli Miles led the team doing what she does best: making the opposing team feel her presence on every single play. Miles led the team in scoring, going 9 of 13 from the floor for 22 points and a game-high 12 steals. Junior Savannah Longhoma finished just behind miles with 20 points, going 7-for-7 from the floor and swarming on defense with 6 deflected shots.

Miles and Longhoma continue to lead the Lady Phantoms in scoring with their complementary play styles — after a opportunistic steal against the Spartans, Miles tossed a long outlet pass to Longhoma, already streaking down the court for and easy catch in stride and lay-in.

The defense was also hitting on all cylinders against the Spartans as Redmon kept shouting the same refrain from the bench: hands striaght up and keep moving.

Redmon said the beginning of the season was positive as the teams, both boys and girls, worked through the challenges of a new coach, a new system and new teammates. Both squads continue to work on meshing together as a team.

“You’ve got five players on the court and you need to use all five,” Redmon said.

Phantoms work on finding a groove

After coming off a season of tough losses, some impressive wins and considerable improvements, the Phantoms varsity and junior varsity squads are getting stronger.

After the Phantoms junior varsity defeated the Spartans, Redmon said the team has looked better than they have all season.