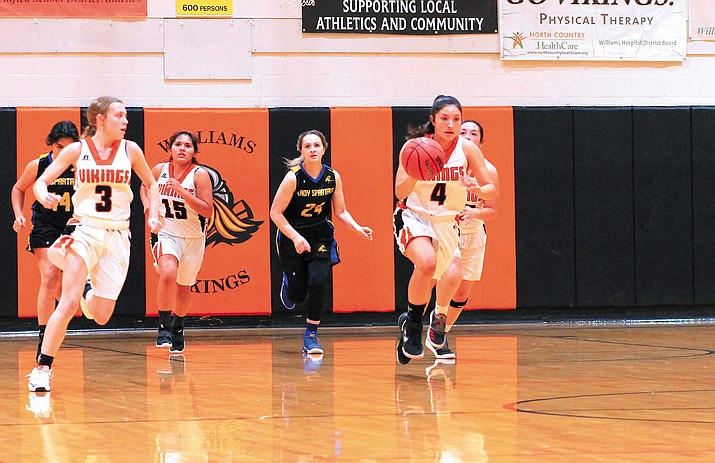 Aaliyah Alvardo heads down court after rebounding the ball in a game with Ash Fork Dec. 10. (Wendy Howell/WGCN)

WILLIAMS, Ariz. — Although they gave St. Michael a better run in their second matchup during the Route 66 Holiday Classic basketball tournament, the Lady Vikes fell to the Cardinals 65-45 in the title game. 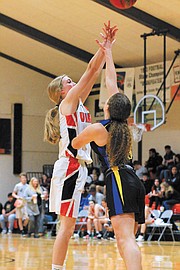 The Lady Vikes went 4-2 in the tournament, with both losses to St. Michael.

Sydnee Mortensen scored 16 points to lead the Lady Vikings, Maegan Ford followed with nine and Aaliyah Alvarado contributed six in the championship game. Alvarado made 4 of 6 at the free throw line, and Mikayla Sanders went 3 of 4. 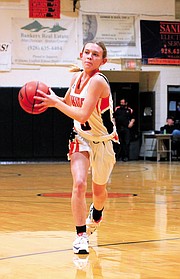 Chyenne Echeverria looks to pass during the game with Ash Fork. (Wendy Howell/WGCN)

Mortensen led the scoring for the Lady Vikes against Joseph City scoring 16 points. She went 5 of 5 in field goals and 2 of 4 in 3-pointers. Mortensen made 10 against Ash Fork. 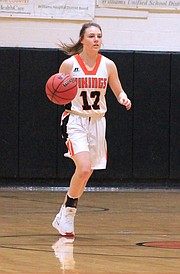 The Lady Vikings faced their fourth loss of the season in a non-conference game with Camp Verde Dec. 10. The team fell 70-51 to the Cowboys. Ford led the scoring with 20 points, followed by Alvarado with 11 and Mortensen with 10.