Magic arrives in Williams with a Las Vegas flare 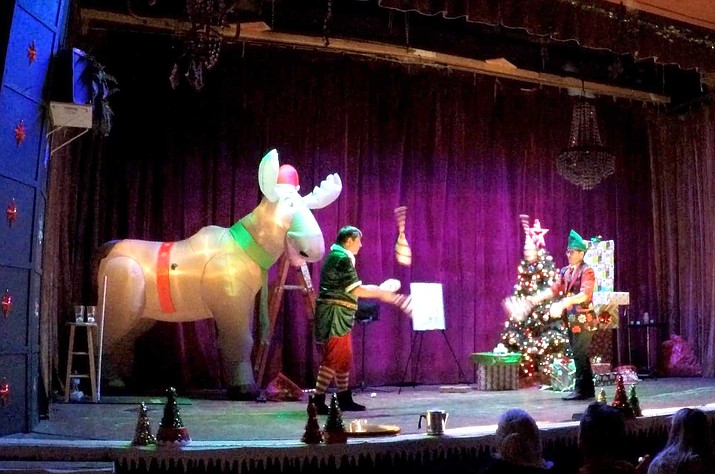 WILLIAMS, Ariz. —There’s more magic in the air than usual during this time of year and it might be coming from a new magic show that is filling seats at the World Famous Sultana Theatre in Williams.

The North Pole’s Got Talent is a family magic and variety show and features magicians straight from Las Vegas — Michael Goudeau, Jacob Jax and Vinny Grosso.

With a lengthy history in show business, specifically magic, Goudeau and Jax along with the show’s host, Grosso, are excited to be performing in one of northern Arizona’s favorite Christmas towns.

The decision to bring the show to Williams was made earlier this year after Goudeau and Jax peaked into the windows of the Sultana Theatre during a visit to Williams.

“Vegas is a big city, with giant high rises and we love it there but this is what I would call a quaint, little delightful town with a beautiful small theater and I just love doing a show here in addition to what we do in Vegas,” Jax said.

Depending on how the show goes this season, they may bring the show back next year.

Those attending the show can expect the performance to last around an hour and will feature comedy, magic, dangerous stunts and juggling.

With more than 40 years in the magic business, Goudeau is an experienced performer. As a part of the show, Goudeau rides a 6 foot tall unicycle, a talent he picked up when he was a 16-year-old street performer in San Francisco.

“When I was 19, I won best street act in San Francisco and there was a Las Vegas agent at that competition and he hired me. I did 20 years in Las Vegas in the Lance Burton Magic Show,” Goudeau said.

Goudeau landed in Williams with The North Pole’s Got Talent after visiting the town to ride the Polar Express with his autistic son.

“We’ve been coming every year to Williams for the train because he’s so obsessed with trains,” Goudeau said. “Because he’s autistic he’s been homeschooled on the computer and he’s been able to travel with me … that’s been one of the great gifts of having this job.”

Jax also has experience in the magic business. He moved to Las Vegas 10 years ago to attend the University of Nevada Las Vegas and reached out to Goudeau after hearing him on the radio and seeing him onstage. Goudeau agreed to meet with Jax and the two started juggling together.

“He started mentoring me and teaching me to write comedy and perform live,” Jax said. “He’s the one that said, ‘if you want to get good you have to do as many shows as possible.’ He told me to start out as a street performer. The next day I went out on the Las Vegas strip and started doing 10-15 shows a day to get better. Now I’ve done 8,500 shows.”

“He’s the only person to actually follow the advice,” Goudeau laughed.

In addition to Vegas, Goudeau and Jax have performed around the world including Japan, France, Greece, Mexico, Finland and Canada.

“We weren’t sure Finland was real until we went there and juggled,” Jax said.

The show takes place at the Sultana Theatre, 301 Historic Route 66 in Williams. Performances are daily at 3 p.m. and 7:30 p.m. from Dec. 6-22. More information is available at npgtshow.com.