Body of man who drowned in creek found; fourth to die there this month 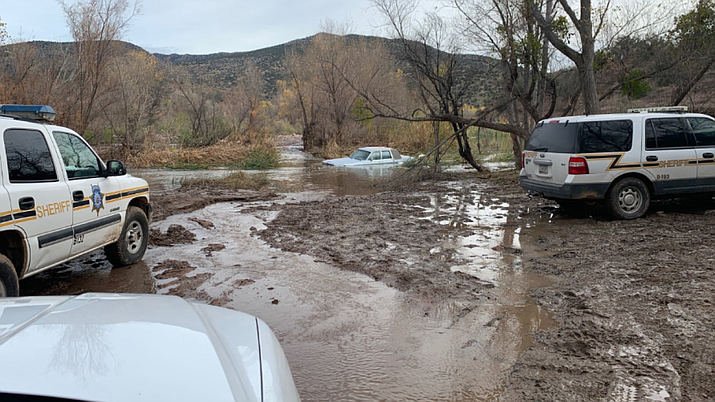 Search and Rescue located Petitte's body approximately 200 yards downstream from where his truck was swept away in Tonto Creek. (Photo courtesy of Gila County Sheriff's Office)

GILA, Ariz. — Divers Dec. 7 recovered the body of the fourth person to die in Tonto Creek in just over a week, the Arizona Republic reported.

The body was identified as that of Robert George Petitte, 69.

Petitte’s body was found on an island about 200 yards away from where the creek swept his vehicle away, the Gila County Sheriff’s Office told the Republic.

Petitte was crossing the creek at Tonto Creek Shores in Gisela, Lt. Virgil Dodd said. Gisela is a small unincorporated community between Payson and Tonto Basin.

Sheriff’s deputies think the man attempted to get out of his car when the rushing water swept him away.

Officials learned of the incident from a 911 call made shortly before 1 p.m. Dec. 7, but Petitte is thought to have died Dec. 6.

“This has been a tragic week in the Tonto Creek. Our thoughts are with the families of those who have passed,” Gila County Sheriff J. Adam Shepherd said in a statement.

The search continues for 6-year-old Willa Rawlings with no new information about the missing child, the Republic reported.