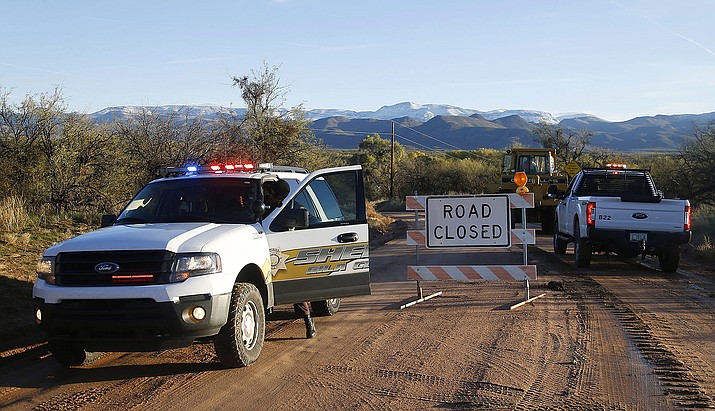 This Saturday, Nov. 30, 2019, photo shows the road closed near Bar X road and Tonto Creek after a vehicle was washed by flood waters in Tonto Basin, Ariz. Rescuers with helicopters, drones, boats and dogs searched Sunday for a 6-year-old girl missing since Friday, when a truck she was in was swept away while attempting to cross an Arizona creek swollen by runoff from a powerful storm. (Patrick Breen/The Arizona Republic via AP)

TONTO BASIN, Ariz. (AP) — Authorities say the search for a 6-year-old girl missing since being swept away in a rural Arizona creek during a rainstorm last week now is a recovery effort and no longer a rescue mission.

Gila County Sheriff's officials say they're trying to bring closure for the family of Willa Rawlings, who has been missing for six days as of Dec. 4.

The search is scheduled to resume Dec. 5 with crews planning to use a robotic boat that can seek out objects in the murky water that's cluttered with debris and weeds.

Sheriff's Lt. Virgil Dodd said searchers combed a 2-mile stretch of water Dec. 4 with boats and sonar equipment for any sign of the girl.

Teams also used drones and search canines to go through debris. A pair of pants found Tuesday were identified as belonging to her.

The girl was one of nine family members in a military-style truck that became stuck Nov. 29 while trying to cross Tonto Creek. The bodies of her 5-year-old brother, Colby, and 5-year-old cousin, Austin, were found Saturday. Her parents, Daniel and Lacey Rawlings, and four other children were rescued.

The crossing had been closed with barricades and signs because of a storm that dropped an estimated 2 inches of rain in the area.

A memorial service for Austin Rawlings was scheduled for the afternoon of Dec. 6 at a church in Peoria, according to a GoFundMe page set up for the girl's family.