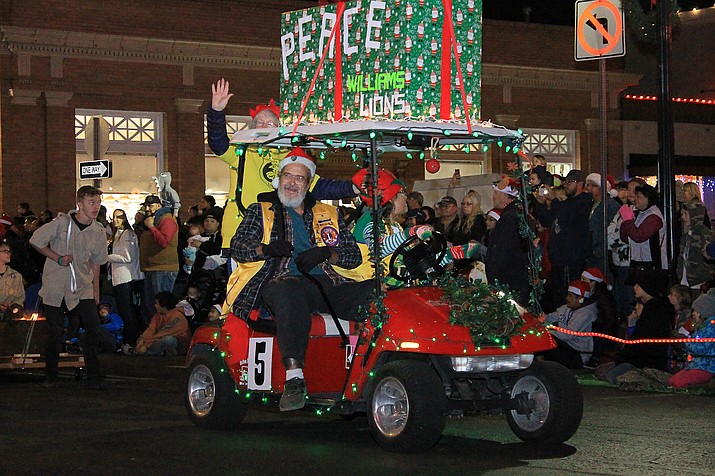 The 2019 Williams Christmas Parade was cancelled because of a major snow storm. (Wendy Howell/WGCN)

WILLLIAMS, Ariz. — The Williams Christmas Parade and Holiday Tree Lighting scheduled for Nov. 30 was cancelled because of the extreme weather Nov. 29.

The Williams Mountain Village Holiday Committee said they do not plan to reschedule the parade after a winter storm dumped nearly two feet of snow on northern Arizona.

In a Facebook post, Bill Sutton, co-chair of the Christmas Committee stated the decision to cancel rather than postpone the annual parade and lighting ceremony was not made lightly.

“It is a bummer to have to do this,” Sutton stated. “I was downtown last night (Dec. 1), and with the snow and ice, and not having access to the Street Department to help us, since they are overworked with plowing, it was a good call. Lots of people were slipping and falling, and there were lots of stuck cars. Having a few thousand extra people in town would have been a major problem. There was talk of doing the event on another date, but there are many reasons for cancelling, too many to list here.”

One reason the event was cancelled was partially because of the amount of media attention dedicated to the parade happening on that date.

“But part of (the reason) was the awesome media blitz we had with Front Burner Media and Heather Herman, who couldn’t possibly recreate it at a later date (we had a full page ad in Arizona Highways, for instance),” Sutton wrote. “The committee always wants to see the event improve year to year, and we didn’t want to see the quality go down, and the turnout be far less than we’ve had in the past. There are other scheduling issues and conflicts, and it just won’t work out.”

Sutton apologized for the cancellation and the hard work that went into planning and preparing for the event.

“So sorry for everyone who loves this event year after year,” he wrote. “Also so sorry to our committee members who have given so much of their time to put this all together. But all is not lost. Our plan is to come back bigger and better in 2020. On behalf of all of us on the Christmas Committee, we wish all of you a Merry Christmas and a Blessed New Year. We’ll see you in 2020 to start a new decade off with an awesome event.”